The Championships are here and four outstanding Group 1 races are set to take place at Royal Randwick this afternoon! 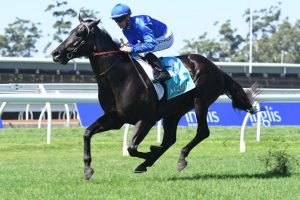 Kementari is top top of the 2018 Doncaster Mile betting market with Ladbrokes. Photo by: Steve Hart

The Doncaster Mile is the feature race of the afternoon and seven Group 1 winners as well as a host of outstanding gallopers will contest this afternoon’s $3 million event.

It is Royal Randwick Guineas winner Kementari that is currently on top of the 2018 Doncaster Mile betting market with Ladbrokes.com.au, but there has been money for Canterbury Stakes winner Happy Clapper ($5), Rosehill Guineas winner D’argento ($7.50) and Ladbrokes Cox Plate runner-up Humidor ($9.50).

Redzel is a clear favourite in the TJ Smith Stakes betting market with Ladbrokes.com.au and Oohood has been well-supported in the Sires’ Produce Stakes, while there has been a big move for Vin De Dance ahead of the Australian Derby.

We will keep you updated with The Championship Day 1 results all afternoon at races.com.au!

It was a poor start for punters on the opening day of The Championships as Paquirri recorded an upset win in the Kindergarten Stakes.

Paquirri was friendless in betting ahead of the Kindergarten Stakes following a poor effort in the Todman Stakes, but he received a lovely run in transit and showed a nice turn-of-foot to record a maiden race win.

Jockey Andrew Adkins gave Paquirri a peach of a ride, but he played credit to the application of blinkers for the improved effort of the I Am Invincible colt.

Muraaqeb returned to winning form with a solid win in the 2018 Carbine Club Stakes at Royal Randwick this afternoon.

Muraaqeb failed to fire in the Phar Lap Stakes last start, but Damien Oliver gave him a lovely run in transit and he finished over the top of Dissolution to score his first race win since September last week.

Holy Snow started the Carbine Club Stakes as favourite, but he missed the start and didn’t find clear running until the 200 metre mark.

Houtzen held-off a stack of challenges to record a brave victory in the 2018 PJ Bell Stakes at Royal Randwick this afternoon.

Glyn Schofield rode Houtzen aggressively and she looked set to be run over in the concluding stages, but she showed plenty of toughness to return to winning form.

Trainer Toby Edmonds was delighted to see his star filly return to winning form and the Robert Sangster Stakes is on the agenda for the Magic Millions Classic winner.

Victorem received a dream run up the inside of the Royal Randwick track to win the Country Championship.

Ben Looker rolled the dice on Victorem and elected to look for runs on the inside, which proved to be a winning play as he found clear running and finished stronger than his rivals.

Victorem ran away from his rivals late and has every possible chance of developing into a genuine Saturday class horse.

Sir Charles Road out-stayer his rivals to record a tough win in the Chairman’s Handicap at Royal Randwick this afternoon.

It looked as though Ventura Storm would race away from his rivals in the final stages of the Chairman’s Handicap, but he simply couldn’t get past Ventura Storm.

Sir Charles Road will press on to the Sydney Cup next week and showed that he can run a strong 3200 metres with his effort in the Auckland Cup.

The horror day for punters at Royal Randwick this afternoon continued as El Dorado Dreaming flashed down the outside to win the 2018 Sires’ Produce Stakes at $100!

Oohood emerged from the pack at the 150 metre mark and looked to have the race won, but El Dorado Dreaming showed a magnificent turn-of-foot to finish over the top of her rivals late.

El Dorado Dreaming was beaten in a maiden at Newcastle last start and even trainer Ben Smith admitted that he was surprised to see his filly win the Group 1 event.

Levendi and Ace High fought-out a thrilling finish of the 2018 Australian Derby and it was Levendi that got his nose in front at the right time.

Levendi looked as though he would storm past Ace High when he showed a nice turn-of-foot at the 200 metre mark, but Ace High was in for the fight and would go away.

Trapeze Artist showed an excellent turn-of-foot to record an outstanding win in the TJ Smith Stakes at Royal Randwick this afternoon.

Jockey Kerrin McEvoy wasted no time taking Redzel to the front in the early stages of the TJ Smith Stakes and he gave his usual kick at the top of the straight.

Tye Angland peeled out on Trapeze Artist at the 300 metre mark and the Golden Rose Stakes winner always looked like he would finish over the top of his rival.

Happy Clapper stamped himself as the second best miler in Australia with an excellent win in the 2018 Doncaster Mile at Royal Randwick this afternoon.

Blake Shinn gave Happy Clapper an absolutely dream run in transit and the veteran galloper always travelled like the winning.

Happy Clapper joined Super Impose and Winx as the only horses in the modern era to win the Epsom Handicap/Doncaster Mile Double in the same season.

Luvaluva will go into the Australian Oaks as a genuine contender following a strong staying performance in the Adrian Knox Stakes.

Luvaluva missed the Vinery Stud Stakes last weekend due to a viral infection and she was forced to lump a big weight, but she was still able to outstay her rivals in the final stages.

Trainer John Sargent confirmed that Luvaluva will back-up in the Australian Oaks at Royal Randwick next weekend.