The 2012 Patinack Farm Classic is set to run at Flemington Racecourse as part of the Emirates Stakes Day action and while the bookies have Sea Siren as their clear pick, does the team at Races.com.au have the same Patinack tip? 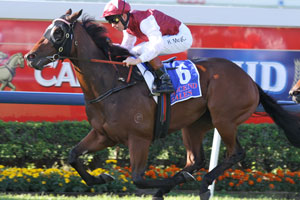 Mental is the Races.com.au tip to win the 2012 Patinack Farm Classic

Set to jump at 2:15pm (AEST) as Flemington race 5, the $1 million Group 1 Patinack Farm Classic (1200m) is being run for the first time in three years without super mare Black Caviar in the mix.

Topping the current Patinack Farm Classic odds at bookmaker.com.au this year however is another mare, the John O’Shea-trained Sea Siren having taken her Group 1 tally to three first-up with a tight win in the Manikato Stakes.

Her biggest dangers are perceived to be multiple Group 1 performer Buffering ($5) looking to bounce back after their Manikato failure, and the improving Peter Snowden-trained Mental ($6) who ran a lovely second to Sea Siren in the Manikato.

So is this the winning Patinack Farm Classic trifecta?

Or are we tipping an upset Patinack Farm Classic result with a longer-priced hopeful such as the Con Karakatsanis-trained Howmuchdoyouloveme, Joe Pride’s smart galloper Tiger Tees or one of the Tony Gollan-trained half-brothers Temple Of Boom and Spirit Of Boom to score a boil-over.

Whether it is our Patinack Farm Classic betting tips or your own selections on the Melbourne Cup Carnival clash you are backing, bookmaker.com.au will have the odds you’re after.