The Victorian form continued to stack-up in Sydney on Day 2 of The Championships with Danny O’Brien’s impressive filly El Patroness dominating the Australian Oaks 2022 results on the Heavy (10) Randwick track. 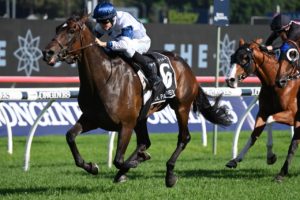 The daughter of Shamus Award improved on her lead-up eighth at Moonee Valley on top of the ground behind the boys in the Group 2 Alister Clark Stakes (2040m) back on March 18 to post a strong victory over the Queenslander Gypsy Goddess in this year’s Group 1 $1 million Australian Oaks (2400m).

A forgotten filly in betting not having been tested on a Heavy track before, El Patroness was huge relishing the mud course and the step-up to a mile-and-a-half winning as a 25/1 outsider.

“I was up there all week for the sales but I decided to come home. She was favourite for the VRC Oaks in the spring but she had a really tough run on Caulfield Cup Day and that bottomed her out,” O’Brien told the media after the victory.

“But she has returned really well this autumn. Her first two runs were excellent but then she had a very difficult run at Moonee Valley the other night when she over-raced and did everything upside down.

“Look, we had always been very confident in her once she got to 2400m. It was really testing conditions but she was powering through the line.

“(Her sire) Shamus Award is such an exceptional stallion and when his horses get to 2400m you are very confident with them. It’s a bit like how it used to be with the Zabeels at a mile and a half, they just grow a leg. I trained Shamus Award and I bred this filly.

“She is my first Group 1 winner by Shamus Award so to that respect it is really satisfying to train Shamus Award and to train this filly.”

Jockey Damian Lane had the eventual winner settled in a lovely on-speed position throughout and El Patroness did the rest, sprinting away the closing stages for a commanding victory.

“Danny and the rest of the stable have always had a high opinion of her and they thought she might be a VRC Oaks horse but she didn’t quite get there, but it’s good to have her here in good form today and do the job,” Lane told Sky Racing post-win.

“It worked out well for me because it was a more genuine tempo than I thought there would be on paper and it suited her. It helped her get into a good rhythm and she was too strong at the end. I travelled so sweetly, got in between a couple on the corner and she just took me through the run. You’re never quite sure here at Randwick because it’s a long way down to the winning post, especially on heavy ground, but she always felt like she was sustaining her gallop.”

There were no excuses for the beaten fillies with all the other on-speed horses holding on to finish in the placings including the David Vandyke-trained Gypsy Goddess ($4) in second and the front-running roughie Gin Martini ($91) who held for third at any old price.

After getting up into third mid-race, El Patroness came off the fence to challenge on the straight moving up to the pace-maker Gin Martini to blow her off a furlong from the line before extending her lead the final 100m for a soft win.

The favourite Hinged ($3.80F) for Chris Waller was far from disgraced finishing fourth.

“We might look at the Queensland Oaks. But the good thing is the Shamus Awards get better with age. (Australian Cup – Tancred Stakes winner) Duais was a good three-year-old but she is a very good four-year-old,” he said.