Matthew Smith’s honest mare Nimalee scored her maiden Group 1 success handling a Heavy (10) Randwick track on Day 2 of The Championships to take out the 2022 Queen Of The Turf Stakes. 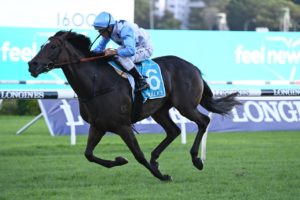 Nimalee relished a wet Randwick track to win the 2022 Queen Of The Turf Stakes in an upset at 30/1. Photo: Steve Hart.

Following the sensational upset by Think It Over in the $4 million Queen Elizabeth Stakes the run prior, there was more value for the punters on offer with Nimalee winning the Group 1 $1 million Queen Of The Turf Stakes (1600m) at a juicy price of $31.

“She raced really well in  Melbourne last prep, fourth in a Group 1 there and wasn’t beaten far. We knew she was right up with these mares just a matter of getting the conditions right and she handled the track well today. It’s a good win,” winning trainer Smith told the media after the race.

Third-up and fit from an inside alley, the five-year-old daughter of So You Think travelled on-speed throughout, as has proved the winning formula all day.

Jockey Damien Oliver celebrated his 127th Group 1 success aboard the Queen Of The Turf Stakes winner, getting Nimlaee home the closing stages after surging past the front-running four-year-old Annavisto.

“They haven’t been making up a lot of ground so I wanted to be a bit more productive from the start from the good draw, hold a position. This mare she’s always very consistent around the place but found it hard to win. But she loved the conditions today, travelled really well in the box seat and gave me a great kick,” Oliver said.

Annavisto lead the field around, while Nimalee was settled in a lovely position fourth then third in the run on the inside of Lighthouse.

The undefeated Victorian Yonce meanwhile was back on the rails mid-field, while the Godolphin-raced favourite Colette was in a tricky position well back.

James McDonald felt for Colette a long way from home at the 600m, but the mare never got out of first gear and dropped right out to run dead last with the hoop declaring she “wasn’t in the mood”.

It was a repeat from the Queen Elizabeth for the Royal Blue brigade whose star colt Anamoe never handled the conditions, losing confidence and finishing 13 lengths last.

Nimalee however was going great guns, Oliver coming out to throw down the challenge on the straight.

She hit the front at the 200m and extended clear going on to beat Annavisto with plenty left in the tank.

In yet another feature race placing, Brad Widdup’s ultra-honest mare and dual Doncaster Mile place-getter Icebath rounded out the trifecta in third.

“Great run by her again. Just got a little squeeze at the start. Very brave to run third,” Icebath’s jockey Kerrin McEvoy said.

The Queen Of The Turf Stakes results also saw Smith enjoy his maiden Group 1 success as a trainer.

“Finally. Not for lack of trying mind you, we’ve had a few swings,” he said.

“I said to Damien in the paddock before the race ‘I think it’s about time we won one in Sydney’ and he was confident. I knew the mare was right so just need a bit of luck in running. It’s a tough race, but she’s a good mare.

“You have a mare like this, as a trainer you want to be winning a Group 1 with her if you can, but sometimes they don’t. Today it just all went to plan, got the right run behind the speed and she was strong to the line.”