Jockey Nash Rawiller produced the ride of the century taking Think It Over to the extreme outside the closing stages to run down Zaaki and take out the 2022 Queen Elizabeth Stakes in a spectacular edition of the $4 million classic. 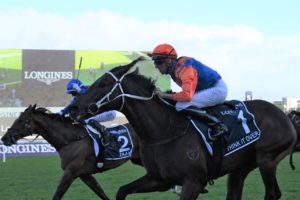 Think It Over was given an incredible ride by Nash Rawiller to win the 2022 Queen Elizabeth Stakes. Photo: Steve Hart.

Throwing caution to the wind and riding with such confidence, Rawiller made a gutsy decision and angled out at the top of the straight on the Kerry Parker-trained Think It Over who was brilliant scoring an upset in the Group 1 Queen Elizabeth Stakes (2000m) on Day 2 of The Championships.

“Our plan was to go forward and I didn’t care if he snuck away at the 1000m. But Nash had gone to the inside on one earlier and went ‘yeah it’s no good there.’ So we thought we’d go to the outside this time and what a thrill,” Parker told Sky Thoroughbred Central post-victory.

“Not so much to go to the outside, that was Nash on his own (deciding on those tactics). But the plan was always to make sure this was genuinely run. My only option was to go out there positive and let the horse do the work and just rely on his guts and will to win.

“Obviously it’s just a little bit better on the outside (track-wise). Very proud of him, sensational. We come here today, I said to the guys ‘we haven’t given up the ghost just because it’s wet and we can’t win.’ We know this horse tries so hard and so does Nash and just the team is overwhelmed.”

The Heavy (10) Randwick track had the punters fleeing from the So You Think six-year-old who had failed to finish in the money in his four previous wet track runs to go around at $41.

With nothing to lose and having obviously picked his lane earlier in the day for the galloper he knows so well, Rawiller pulled out a bit of magic to get Think It Over home in a star-studded showdown.

“What a horse. So disappointing just with the autumn the way it’s panned out with all the wet tracks. You know those good ones can find a way to win can’t they? I trotted down the outside fence going to the barriers on one of them earlier in the day and thought ‘I’ll keep this up my sleeve for later’,” Rawiller said.

“Even coming down the side there I was sitting off the fence. We just tried to keep him in clear ground. I thought he was going to run a good second, but when he hit that fresh patch of grass, away he went.”

Having been thereabouts his past three starts, the galloper was runner-up to Duais two back in Flemington’s Group 1 Australian Cup (2000m) before a fourth to the same mare in the Group 1 Tancred Stakes (2400m) at Newcastle.

Think It Over franked that form, getting to the outside fence to power home late and run past the Annabel Neasham-trained Zaaki ($5) in jaw-dropping style.

“Just what a wonderful job they’ve done with this track. To not just be racing but to give a bloke like mine a chance of winning,” Rawiller added.

“The reason why he was odds like that is the conditions and it’s just a funny thing how it worked.

“When I straightened I thought ‘it’s worth a go’ to get to the outside. I just felt it’s where the ambulances drive and all the tractors run up the outside fence. For my bloke it was like going from a Heavy 9 to slow 6 which he can handle. When he can handle the track he does that, he’s a very good horse.”

Getting up for third in a massive Queen Elizabeth Stakes trifecta was roughie hope Mount Popa ($61) for Team Hawkes off an on-speed run, while the South Australian Dalasan ($81) rounded out the first four.

Last start winner of The All-Star Mile, Zaaki got a soft lead in the Queen Elizabeth rolling out to clear the pack along the inside with Think It Over also moving forward early to settle second the outside.

Mount Popa landed in a lovely position third the outside of Dalasan in fourth, while Godolphin’s seven-length Rosehill Guineas winner Anamoe raced around in fifth before trailing right off to finish dead last some 13 lengths off the winner.

The $3.80 favourite, Verry Elleegant, meanwhile was second last at the 1000m and never worked her way into the race finishing a well back fifth in potentially her swansong appearance.

The pace quickened at the 600m, Zaaki leading into the straight before the powerhouse move by Rawiller and Think It Over.

The rest will go down in the Australian racing history books.

”I had a lot of good horses behind me. I don’t want to carry on about what I did, it’s all about Kerry Parker and his team down at Kembla Grange. To come around and win this big race, it’s one in a million and he’s pulled it off today. It was unreal,” Rawiller said.