A late entry into next month’s $2.5 million TJ Smith Stakes could be on the cards for cult galloper Shelby Sixtysix after Danny Williams‘ mudlark continued his fairy-tale rising from a Highway horse to Group 1 winner with an outstanding win in The Galaxy 2022 results. 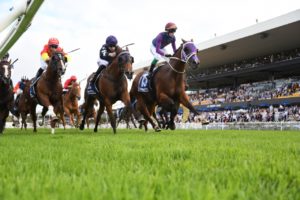 Coming from nowhere to dominate the Sydney sprints this autumn, Toronado gelding Shelby Sixtysix was the rock-hard fit horse in the Group 1 $700,000 The Galaxy (1100m) racing for the eighth time in just nine weeks.

The progressive five-year-old was a Highway Class 2 winner over 1000m at Randwick in late February before his incredible run to beat home The Everest hero Nature Strip (3rd) when runner-up to Eduardo in the Group 2 Challenge Stakes (1000m) on March 5.

On the quick back-up he went on to win last Saturday’s Group 3 Maurice McCarten Stakes (1100m) at Rosehill where he returned just seven days later to add The Galaxy win to his growing CV.

“What about that? That was incredible! How good of a story is that”, an overjoyed Williams said post-victory.

“How well is he going? That is incredible.

“Is he in The Everest? What an incredible story. I can’t believe it, what do you say?

“The horse got beaten her a few runs ago and to be winning a Group 1.

“See how he hit the line?

“Fantastic for (jockey) Robbie (Dolan) and all my owners and all my staff, unbelievable.”

Getting into The Galaxy as an eleventh-hour call-up as the first emergency, Shelby Sixtysix relished having just 52.5kg on his back and was given a lovely ride by Robbie Dolan.

It was the Gai Waterhouse & Adrian Bott-trained returning Golden Rose champ In The Congo taking-up the lead and controlling things at a moderate pace up-front looking to go all-the-way fresh.

Once on the straight, Dolan got out into the clear on Shelby Sixtysix at the 200m and he was quickly on the chase running down In The Congo and Big Parade.

In a thrilling final furlong, those three fought it out with Shelby Sixtysix ($7) extending his neck to put his nose down right on the line and defeat the Mark Newnham-trained Big Parade ($13) who was racing for the first time since his $1 million Classique Legend Stakes fourth last October.

“Shelby Sixtysix, get him in The Everest. He’s a superstar. Danny Williams – what a training performance that was,” winning jockey Dolan said.

“Racing is swings and roundabouts, you just have to take it on the chin and you know I picked myself off the ground – a lot of people were abusing me the other day after that horse (Profondo) but stuff happens and you just have to go on with it. I’m just very grateful to get on this horse today.

“Danny gave me my first couple of winners in Australia, I used to ride for him a lot down in Goulburn, he’s always been a big supporter of mine. Unbelievable training performance.”

In The Congo ($14) held for third only a half-length beaten in a lovely autumn campaign kick-off to complete The Galaxy trifecta.

Williams has options galore with Shelby Sixtysix including a potential April 16 run over further in the Group 1 $600,000 All Aged Stakes (1400m).

He also hasn’t ruled out paying the late entry fee to get his stable ace into the Group 1 TJ Smith Stakes (1200m) at Randwick on April 2 where he would come up against the big guns again.

“I have been on such a high since the Challenge Stakes and the horse has just gone right to the sky. I can’t believe it.”

All-in 2022 TJ Smith Stakes odds at Ladbrokes.com.au have Nature Strip as the $3.30 favourite, while Shelby Sixtysix is a $21 outsider.

La Baraka (1998) is to date the only horse to win The Galaxy and TJ Smith Stakes in the same year since the latter was inaugurated in 1997.