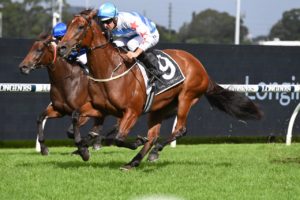 Continuing her outstanding autumn, the four-year-old daughter of All Too Hard was too good once again backing-up from a winning double in the Guy Walter – Canterbury Stakes at Randwick to salute at Rosehill Gardens in this year’s Group 1 $1 million George Ryder Stakes (1500m).

Hugh Bowman produced another peach of a ride on the bonny bay, allowing her to settle fifth in the run as Riodini pushed forward to lead.

Around the turn, Bowman moved up into third on the favourite, chasing down new leader on the straight Laws Of Indices.

Off a patient ride, Bowman nursed the mare as long as possible before producing her at the right time to secure his 101st Group 1 victory.

“It was pretty straight forward. I didn’t expect as much pressure in the early stages that eventuated but that did suit me, I was more than happy to take a sit in behind the pace,” Bowman said.

“She’s a mare in superb form, Richard and Michael (Freedman) have managed her just amazingly and she does enjoy the wet track, so she’s been one of the lucky recipients of all this rain that’s been around. She doesn’t need the rain to perform but she certainly comes to her best when it’s around.

“She just wanted to get on with it and she’s a very competitive mare and I knew then it was a very similar feeling than I got in the Canterbury Stakes last start.

“She’s in great form, I don’t know what they plan to do with her – possibly a Doncaster. I can’t see myself riding the ridiculously low weight she has, but where she does go she will certainly make her presence felt because she’s in great order.

“I don’t think she has to get better, really I don’t. I think she’s at the peak of her powers and if she can sustain that she will take some beating wherever she goes.”

Forbidden Love ($2.40F) travelled like the winner a long way out with the James Cummings-trained Colette ($4.60) presenting as the danger getting up on the inside to make a late race of it.

The eventual winner however hit another gear inside the final furlong to beat Colette by over a length on the line, while the Annabel Neasham-trained import Laws Of Indices ($20) off an on-speed run was excellent in third.

“She is an absolute gem,” co-trainer Michael Freedman said of Forbidden Love post-win.

“Obviously she is relishing these soft tracks but she’s not just a wet tracker. When you get these mares in for and they can really string these runs together, it’s really satisfying as much as anything.

“We discussed before the race that there might be a bit of pressure up front, even though it didn’t look so on paper. I think there were a few there that wanted to make sure she didn’t get her own way in front.

“It probably adds another string to her bow that she can be ridden just off the speed with a view to maybe looking at a Doncaster in two-weeks time with 50 kilos on her back. It was nice to see her be able to take a sit and still have that great turn of foot.”

The Group 1 $3 million Doncaster Mile (1600m) runs at Randwick on April 2 on Day 1 of The Championships.

Updated all-in 2022 Doncaster Mile betting on Forbidden Love to be the next has her into $9 third favouritism through Ladbrokes.com.au – full markets available here.