Sierra Sue was outstanding at weight-for-age proving her class with a powerhouse victory in the 2022 Futurity Stakes results to kick off the Group 1s on Blue Diamond Stakes Day at Caulfield. 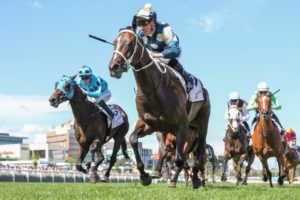 Sierra Sue was excellent with her upset win in the 2022 Futurity Stakes at Caulfield on Blue Diamond Day. Photo: Ultimate Racing Photos.

Given a terrific run between horses by John Allen, the Trent Busuttin & Natalie Young-trained daughter of Darci Brahma celebrated her second Group 1 success at the track and distance having won the Sir Rupert Clarke Stakes here back in September.

This time it was at WFA second-up in an improved effort off her fourth to Tofane in the Group 1 C.F. Orr Stakes (1400m) and the success makes her a very valuable future broodmare.

“With the way the track was going today we were a little worried….but it panned out perfectly.

“Today it just worked out perfect.

The mares dominated in this year’s $750,000 Futurity Stakes (1400m) running one, three and four with the second-placed Mo’unga for Annable Neasham separating them.

The fourth mare in seven years to take out the Futurity Stakes and the second straight after Probabeel in 2021, Sierra Sue got a lovely run in transit and was strong late.

With Turaath leading the small Futurity field around, the pressure was poured on out wide by Streets Of Avalon who moved up into second challenging for the front.

Orr winner and race favourite Tofane was settled fourth the fence, while Allen just sat back and took his time on Sierra Sue knowing she had a powerful final furlong sprint ready to go when asked.

With 350m to go, Sierra Sue started to lift the outside taking up the lead inside the last 100m pulling well clear to hold off the fast-finishing Mo’unga who made up plenty of ground from the back.

“The race couldn’t have worked out any better really,” winning jockey Allen said.

“I knew there would be a bit of pressure early, but we just wanted to use a bit early to hold the box seat.

“I was happy when we were tracking through, the horse outside the lead was asked to do a lot of work, so I was pretty hopeful it was going to drop off in the home straight and we were travelling that well.

“When she did get out, she let down well and showed a good turn of foot. Natalie and Trent had her spot on for today and they were very confident she would be hard to beat.”

There’s a plethora of elite level autumn racing options ahead for Sierra Sue now, with Young even suggesting the mare might still line-up in the $5 million The All-Star Mile (1600) at Flemington on March 19.

“I think she’s the sixth emergency for an All-Star Mile, so we have to give it plenty of thought,” she said.

“We could take her back to Flemington or keep her for Adelaide in the Robert Sangster Stakes and freshen her up.”

Sierra Sue is currently at $15 in futures 2022 The All-Star Mile betting – available in full courtesy of Ladbrokes.com.au here.