Racing Victoria have today taken first acceptances for three upcoming Group 1 features with the latest round of declarations closing for the Australian Guineas, Newmarket Handicap and Australian Cup at Flemington Racecourse. 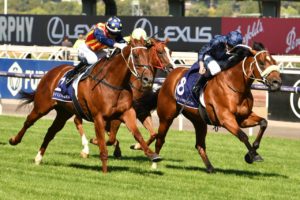 First-up on the calendar, the Group 1 $1 million Australian Guineas (1600m) takes place over the mile at HQ on March 5 with 37 three-year-olds left in contention and can be viewed in full here.

Hitotsu is aiming to become the first horse in the 40-year plus history of the Australian Guineas to win the race first-up, while CS Hayes runner-up Pascero has also been paid for at first declaration stage.

A host of Australian Guineas entries are also set to race this weekend including Coastwatch, Lightsaber, Ranch Hand and Extreme Flight all entered for the Group 1 Futurity Stakes (1400m) on Blue Diamond Stakes Day at Caulfield, while class fillies Espiona, Fangirl, Hinged and Yearning are set to contest the Group 1 Surround Stakes (1400m) in Sydney.

Newmarket Handicap first acceptances also drew 37 entries as the list of sprinters chasing the big prize down the ‘straight six’ narrows, which can be found in full here.

The standout Newmarket-bound runners in the mix include: Chris Waller’s upset Black Caviar Lightning winning three-year-old from last weekend at the track Home Affairs who defeated a luckless Nature Strip in a thriller, the Anthony & Sam Freedman-trained Artorious and John O’Shea’s Classique Legend Stakes winner Lost And Running who returned with a Southern Cross Stakes win in Sydney last weekend.

Waller has also paid first acceptances for his beaten Black Caviar Lightning favourite, Nature Strip, who missed the kick before powering home late but The Everest champ is a doubtful final acceptor due to the handicap conditions of the race.

The reigning Newmarket Handicap winner is also still in contention, Zoutori looking to become the race’s sixth back-to-back winner in the 149-year history of the sprint classic. The last was Redkirk Warrior (2017-18).

“The Yulong Stud Newmarket Handicap could see a second clash of the titans between Home Affairs and Nature Strip but with a large and competitive field that typifies the race,” Jordan said.

This year marks the historic 160th running of the Australian Cup and Waller also remains in with a strong hand of five led by his Melbourne Cup winning mare Verry Elleegant.

The other Waller-trained entries are: Hungry Heart, Great House, Shared Ambition and Yonkers.

Five three-year-olds remain in the potential Australian Cup line-up including Australian Guineas favourite Hitotsu, Victoria Derby runner-up behind him in the spring Alegron, two-time Group 2 winner Forgot You, El Patroness and fellow Black-Type winner at the track Spirit Of Gaylard.

“The TAB Australian Cup will be run for the 160th time and is set to crown a new weight-for-age star,” Jordan said.

Click here for the latest Australian Guineas 2022 betting odds courtesy of Ladbrokes.com.au ahead of the final field announcement on Wednesday March 2.

Click here for the latest Newmarket Handicap 2022 markets and here for the updated all-in Australian Cup 2022 odds, final acceptances for both events due on Wednesday March 9.