Flemington’s Newmarket Handicap down the iconic straight on Super Saturday could be on the cards this autumn for the progressive Ciaron Maher & David Eustace-trained Generation following the colt’s powerhouse return in the 2022 Manfred Stakes. 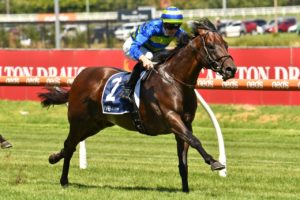 One of just five three-year-olds lining-up in this year’s Group 3 $200,000 Manfred Stakes (1200m) at Caulfield, Generation was given a perfectly-timed and confident ride by hoop-of-the-day Jye McNeil.

McNeil celebrated his fourth straight win at the meeting, biding his time aboard well-bred Snitzel colt Generation who got into a lovely trailing position behind the previously undefeated leader Unflinching.

The Anthony & Sam Freedman-trained Unflinching over-raced up front never dropping his head and, once on the home straight, dropped right out to run dead last.

After travelling up nicely behind the front runner, Generation hit the front 200m out and gave a strong kick when the challengers came from further back inside the final furlong.

James Cummings’ eventual runner-up Zethus made a race of it late, last year’s Group 3 Canonbury Stakes winner making up ground fresh, but Generation was too strong.

It was an impressive performance from the Manfred Stakes winner who enjoyed a second career Group 3 win having last been seen taking out Moonee Valley’s Red Anchor Stakes over the same distance last October.

McNeil pounced at the right time off the patient ride trailing the speed and Generation responded well, extending on the line to win by a length and a quarter.

“Ciaron was pretty mindful of just letting the horse rally travel deep into the race, he’s a colt and there’s a bit of improvement there.

“He (McNeil) got it spot on. When he asked him to quicken, he quickened well. It was a nice watch.”

In third rounding out the Manfred Stakes trifecta was the Danny O’Brien-trained Linas Legend.

There look to be plenty of Melbourne Autumn Racing Carnival options now for Generation who is building a terrific record, but Eustace ruled out a clash with the stables undefeated mare Marabi in the Group 1 Oakleigh Plate (1100m) on Blue Diamond Stakes Day, February 26.

“We probably won’t be doing that (the Oakleigh Plate), not just because of her (Marabi) but we just don’t think he’s an 1100m horse. He’s not quite sharp enough.”

Instead, the likely next-up assignment will be the Group 3 $200,000 Zeditave Stakes (1200m) at Caulfield on the same day before a potential elite-level assignment.

“The Zeditave’s back here then the Newmarket would probably have a consideration now down in the weights later on,” Eustace said.

“There’s also the William Reid, but he’d have to win another race before going to races like that.”

Generation is currently listed as an $18 chance in the latest all-in 2022 Newmarket Handicap odds at Ladbrokes.com.au – full markets available here.