There is becoming a bit of value about the short-priced favourite in 2021 Melbourne Cup betting for Tuesday with Incentivise nearing $3, while Delphi is the early market mover for the ‘race that stops a nation’. 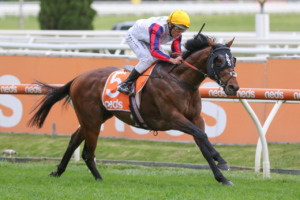 While it looks far from a vintage edition of the Group 1 $8 million Lexus Melbourne Cup (3200m) this season, there are still plenty of stories and form lines to follow into the world’s richest handicap.

None has been more documented than that of the Peter Moody-trained Queensland expat Incentivise who is out to extend his winning streak to 10 on the trot.

With former trainer and still part-owner Steve Tregea the son of Shamus Award worked his way up from an eighth in a Toowoomba maiden in March to win six straight in the winter.

The last with Tregea was the bullish 12-length Group 3 Tattersall’s Cup (2400m) victory over Mirage Dancer that instantly saw him hit the top of all-in Melbourne Cup betting.

He has not budged from his position as Melbourne Cup favourite since and his lead-up spring with Moody has been flawless.

Wins in the Group 1 Makybe Diva Stakes (1600m) and Group 1 Turnbull Stakes (2000m) showed he was not just a stayer and then there was the Caulfield Cup performance.

From barrier 18 of 18 he and Brett Prebble combined for a sensational 3.5 length victory over the mile and a half, setting Incentivise up for a shot at the Caulfield Cup – Melbourne Cup double completed by just 11 before him in the same year.

Incentivise got into as short as $2.25 in the Melbourne Cup odds at Ladbrokes.com.au – the shortest priced favourite since Phar Lap (1930) – but has eased out to $2.90 in the latest markets drawn barrier 16 and carrying 57kg.

Damien Oliver has the ride having been aboard for the horse’s two lead-ups including the Group 2 Herbert Power Stakes (2400m) victory two back with 57kg.

Things did not go to plan next-up in the Caulfield Cup however with Delphi, from gate 17, finishing 11 lengths back 13th to Incentivise on the short turnaround.

With a bit of a break between runs now, he could be one of the value runners in this year’s Melbourne Cup field and it seems the punters agree.

A few of the other horses higher up the markets have been on the drift the past 24 hours or so leaving Incentivise as the sole single-figure runner in betting looking to become just the second favourite in 16 years to salute for the punters.

History shows that in the past 31 editions of the Melbourne Cup only three winners have paid more than $20.

Outside of Incentivise and Delphi there are a further six chances that fit that bill this year including the defending champion Twilight Payment ($12) and Spanish Mission ($10) who are the only two international Melbourne Cup contenders in 2021.

Having his third start in the race, Twilight Payment has Jye McNeil aboard again out to hand owner Lloyd Williams and eighth victory and trainer Joseph O’Brien his third ‘Loving Trophy’.

Racing as a nine-year-old in Australia, he will need to make history as the first of that age to win and also carries the 58kg in another query for the defending champion.

Spanish Mission meanwhile jumps from gate 14 with Craig Williams riding, the Andrew Balding-trained UK visitor out from $7 having only been passed fit to ride on Saturday afternoon following two previous failed vet checks.

Floating Artist has come into a $14 quote for master trainers of stayers Ciaron Maher & David Eustace, the 50kg lightweight to be ridden by Teodore Nugent.

It was 50/50 the Nathaniel gelding would make the top 24 after he failed to win the Group 3 Coongy Cup and Group 2 Moonee Valley Cup running third and second respectively.

The galloper sat right on the cusp of a start, but they opted to roll the dice and did not run him Derby Day’s Lexus Stakes.

It proved the right decision with the galloper, a nostril flare off the Moonee Valley Cup winner on Cox Plate Day, now rested and in with a genuine shot.

Equal on $15 are the Chris Waller-trained Australian Racecourse of the Year Verry Elleegant coming off a Cox Plate third over 2040m and stylish The Bart Cummings champ Grand Promenade for the Ciaron/Maher stable both drawn wide in gates 19 and 21 respectively.

Tralee Rose meanwhile is into $16, the Symon Wilde-trained Tavistock mare coming off a brave win in the Group 3 Geelong Cup (2400m).

*Note: All Melbourne Cup odds quoted are correct at time of publish, provided by Ladbrokes.com.au and subject to change without notice.