Caulfield Classic winner Gunstock is back on top of Victoria Derby 2021 betting for this weekend with the punters getting behind the class young stayer in the time-honoured classic. 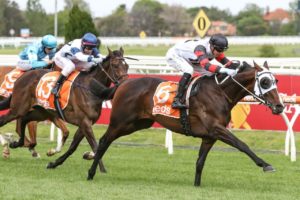 Gunstock is back on top of 2021 Victoria Derby betting for Saturday at Flemington. Photo: Ultimate Racing Photos.

A capacity field of three-year-olds face off in Saturday’s feature race at Flemington, the Group 1 $2 million Penfolds Victoria Derby (2500m) one of four elite levels on the opening Melbourne Cup Carnival card.

Heading the latest Victoria Derby odds at Ladbrokes.com.au is the beautifully-bred Tavistock colt out of Zabeel mare Zeranti, Gunstock at $4.20.

Last year’s Melbourne Cup winning jockey Jye McNeil, who on Thursday confirmed he would partner the reigning champion Twilight Payment in his title defence next Tuesday, stays on the Derby favourite having ridden Gunstock for his two latest starts.

The most recent of those saw the colt race in Group company for the first time winning the Group 3 Caulfield Classic (2000m) by nearly two lengths.

He got a sweet run from barrier 2 of 11 that day, but will need to be good drawing the second outside gate in the Derby ahead of the gruelling 2500m test.

A horse that traditionally settles mid-field, Gunstock may find himself either caught wide or settling back here giving McNeil plenty of work to do to overcome the alley and win.

The second elect in the markets on the drift right out from $3.60 to $4.50 is Forgot You from the Trent Busuttin & Natalie Young stables.

Drawn ideally in gate eight for one of the season’s form jockeys Daniel Moor, who has won three Group 1s, the in-form Savabeel colt is being forgotten by the punters.

Winner of the Group 2 Stutt Stakes (1600m) – Moonee Valley Vase (2040m) double, he was brave running down his 100/1 stablemate Commander Harry in the latter on Cox Plate Day and presents fit on the quick back-up.

With strong form on Soft tracks and the Vase form having been the one to follow into the Derby in recent history, Forgot You is getting out to a very backable price.

Not starting top of the markets in the Derby is also statistically an advantage as only two favourites since 2006 have saluted for the punters with Tarzino (2015) and Ace High (2017).

The big Victoria Derby market mover over the past 24 hours meanwhile is Maurice colt Hitotsu for Ciaron Maher & David Eustace who only two starts back was winning his maiden at Donald.

After coming up trumps with barrier seven for hoop John Allen, Hitotsu has firmed from $8 to $5.50 to win third-up and improve on his eye-catching fifth to Anamoe in the Group 1 Caulfield Guineas (1600m) from October 9.

The horse with the longest-distanced win on his record coming into the Victoria Derby this season is the Tony Pike-trained Kiwi Tutukaka coming off a win in the Listed Geelong Classic (2200m).

With emergencies out the Geelong Classic winner is likely to jump from barrier 10 with master hoop James McDonald in Melbourne for the ride, the duo at $9 for the win in current betting.

Rounding out the single-figure Derby chances is the Godolphin-raced Alegron for James Cummings and the season’s best Brett Prebble.

An upset by Alegron in the famous Royal Blue will see Prebble secure his incredible seventh Group 1 of the season, or eighth if he manages a boil-over one race earlier on Kiku ($34) in the Empire Rose Stakes!

Gunstock’s stablemate Jungle Magnate at $18 is surely overs drawn well (5) and powering home from the back late to run third in last Saturday’s Vase.

Jumping one on his inside, the Archie Alexander-trained Teewaters ($19) has also been racing better than his price for the big race suggests with four straight placings.

The latest from the son of Dundeel was behind Gunstock in the Caulfield Classic when working home well for third and looking suited to further.

The 2021 Victoria Derby is scheduled as Flemington Race 6 at 3:45pm (AEDT) with the latest markets from Ladbrokes.com.au available here.