The Tony Gollan-trained Jonker has added value to his future value at stud with a brave win going all-the-way to hold off fast-finishing mare Bella Nipotina in an exciting edition of the Group 1 $1 million Ladbrokes Manikato Stakes (1200m) under the lights at The Valley on Friday night. 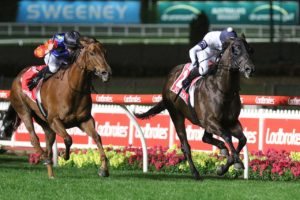 In-form jockey Daniel Moor had to do some work early in a frenetic start to the weight-for-age feature, but eventually got to the front on the six-year-old Spirit Of Boom entire who was simply too fast for his rivals.

Jonker jumped favourite in Manikato Stakes betting despite it being his first run at Moonee Valley and he did not disappoint posting his first victory since January’s Magic Millions Sprint on the Gold Coast.

Improving on a lead-up sixth behind subsequent The Everest runner-up Masked Crusader in Sydney’s Group 2 Premiere Stakes (1200m), the speedy front runner took his career earnings up over $2 million and is now a very valuable stallion prospect.

“I said to Peter (Snowden, trainer of Wild Ruler) and Tony Gollan this morning that this horse gave me a very similar feel to Wild Ruler on his track work here alone last week,” Moor told the media post-win.

“He’s just a lovely gentleman of a horse, he’s an older horse that sort of likes a challenge.

“Obviously being a Group 1 race there was a lot of speed and Jye (McNeil) on my inside was kicking up on Lombardo and I knew it was going to be there, but I also knew I had the horse to absorb that sort of pressure early.

“Down the side we backed it off nice enough, just where he came back underneath me and had enough kick in the locker.”

There was nothing to spare on the line as Jonker ($5.50F) just held on over the Ciaron Maher & David Eustace-trained four-year-old Pride Of Dubai mare Bella Nipotina ($7) who has now run second in four of her five runs at Moonee Valley.

After tracking well on speed the fence throughout, she got the late gap on the straight with jockey John Allen coming with a big late charge but just ran out of time.

“I don’t like getting beat by anyone, but I don’t mind having a beer with Tony (Gollan) when we get up to Brisbane during the carnival,” Bella Nipotina’s co-trainer Ciaron Maher said.

“His horse was brave and Bella Nipotina adds to her breeding page. The owners will be tickled pick.

“She was a bit stiff and another couple of strides and she would have made it interesting.”

The Godolphin-raced Ingratiating ($10) rounded out the Manikato Stakes trifecta running a further two and a quarter-lengths back for third without ever looking a genuine threat.

It was an improved and luckless run for the fourth placed Streets Of Avalon ($31) at a big price, Shane Nichols’ dual Group 1 winner missing the kick before getting squeezed out at the top of the straight.

The Manikato Stakes result saw Moor celebrate his third Group 1 win for the season after recent success in the Sir Ruper Clarke Stakes on Sierra Sue and The Valley’s Moir Stakes on Wild Ruler.

“It’s a really good feeling, I’m glad I’m doing it later on in life because it is a really satisfying feeling,” Moor said.

“I’m not going to go out and get on the gas and ‘yahoo’, I’m going to go home and selfishly enjoy it with my family.

“Business as usual. It’s a great time and I’m going to remember it for a long time. You work for this your whole life.

“A couple of jockeys, Nikita Beriman said that when you win Group 1s early on it becomes a blur and you forget but definitely loving things at the moment.”

Jonker is now rated a $26 chance through Ladbrokes.com.au to potentially head to Flemington on November 6 over the Melbourne Cup Carnival for a shot at the Group 1 $2 million Darley Sprint Classic (1200m).