The $7.5 million The Golden Eagle is on the radar for the Joe Pride-trained Private Eye after the four-year-old’s outstanding win in the Epsom Handicap 2021 results at Royal Randwick. 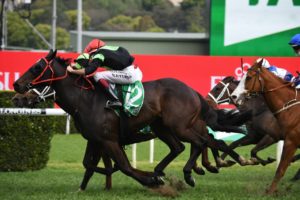 Private Eye heads towards the $7.5 million The Golden Eagle on the back of a win in the 2021 Epsom Handicap. Photo: Steve Hart.

Pride had targeted the Group 1 $1.5 million Epsom Handicap (1600m) all the way along with his consistent son of Al Maher, the horse rewarding his trainer thanks to a gun ride by the in-form Regan Bayliss.

Bayliss celebrated back-to-back Group 1s on the day after success aboard Never Been Kissed in the Flight Stakes and was excellent late riding Private Eye to perfection over the same distance in the Epsom.

A first-up winner of the Group 3 Show County Quality (1200m), the galloper had had two subsequent runs the latest a close fourth behind Atishu in the Group 3 Bill Ritchie Handicap (1400m) on September 18 carrying 57.5kg.

He relished a drop in weight for the Epsom Handicap and settled well in the second half of the field as Ashman lead them around.

Onto the straight and Bayliss took Private Eye straight to the outside, the horse excellent deep out on the track finishing off the final furlong in style.

The South Australian Dalasan was also good late hitting the front at the 200m with the Chris Waller-trained Aramayo the other danger.

In the end Private Eye ($11) dug deep and held off Aramayo ($12), third in the Bill Ritchie last time out, with the Epsom Handicap trifecta rounded out by Dalasan ($14) who was under a quarter-length beaten.

“I couldn’t help but give him a cheer in my lounge room. My old boss John Size was a statue when he watched races and I would think how does he do that. Everyone is different but I’ve always felt the day I can’t give them a cheer I will hand over the reins to someone else,” Pride said post-race.

“I knew I had given him the right prep and I was confident in the horse. You need luck in these Epsoms, they are hard to win, but it all panned out beautifully and he has got an engine this horse, he’s a ripper. When he won first-up he signaled to me that day he had come back bigger and better than ever.

“In his last two starts, it just hasn’t worked out for him but I knew in an Epsom, they are high pressure races and it would suit him. I put the blinkers on the other day and I wasn’t sure what to make of his run but Hugh got off him and said the horse went really well. It was a call I had to make and I decided to leave them on.

“It’s so good to get this big win for Jamie Walter, you would not meet a nicer person, he is just like his (late) brother Guy. Jamie is a gentleman this is my biggest win for him.”

“Kolding won the Queensland Guineas-Epsom Handicap-Golden Eagle treble two years ago. I am well aware of what Kolding did. We have won the Guineas and the Epsom and he will go straight to the Golden Eagle now. The Queensland winter carnival didn’t look overly strong this year. But Eduardo, Incentivise and Private Eye all won good races all came through the winter carnival.”

As mentioned by Pride, Kolding (2019) was the last horse to complete the Epsom Handicap – Golden Eagle double.

All-in Golden Eagle 2021 betting markets at Ladbrokes.com.au on Private Eye to be the next are into $9 and are available in full here.