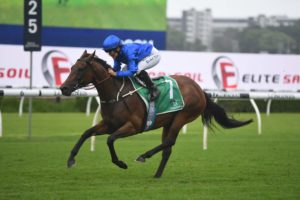 The reigning ATC Oaks champion and last start winner of the $7.5 million The Golden Eagle, James Cummings’ Hallowed Crown four-year-old Colette was the forgotten horse in a star-studded edition of the Group 2 $250,000 Apollo Stakes (1400m).

She had had just the one quiet lead-up trial ahead of her autumn return, but could not have been more impressive running away from a quality field fresh.

Looking improved again from her last campaign, Colette ($12) went around at a nice price despite being undefeated on wet tracks and had conditions to suit in the Apollo.

The mare was confidently ridden by Rachel King, who took the box seat just off the pace behind them, conserving energy before peeling off the back and running away with a very soft victory in the end.

Chris Waller’s Caulfield Cup winning mare Verry Elleegant ($2.50F) was the clear favourite, but she missed the kick and then over-raced to get into position.

Her stablemate Kolding ($4) settled better second on the inside along the fence, moving up to test the front runner Prince Fawaz as they approached the bend.

Into the straight Kolding lay it down to the pacemaker, moving into the lead briefly before Colette came with her run, hitting the front 150m out from the line.

Colette ripped away for a brilliant two length win over Kolding, the inaugural two The Golden Eagle champions franking the form of the newly created feature for four-year-olds.

Verry Elleegant meanwhile did her best work late finishing a neck further back for third in a run she will take plenty of improvement on getting out over more distance later this autumn.

The sky’s the limit for Colette this campaign, with a race like the Group 1 $600,000 Chipping Norton Stakes (1600m) back at Randwick on February 27 looking a nice next-up option.