The money is coming for in-form mare Inspirational Girl to post another upset over weight-for-age star Zaaki when the duo renews rivalries at Flemington in the 2022 The All-Star Mile on Saturday. 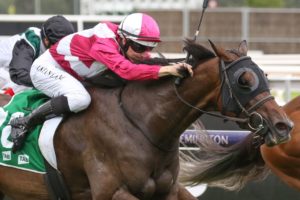 A quality field of 15 face off in the fourth edition of the $5 million The All-Star Mile (1600m) with the world’s richest mile race returning to its inaugural home at headquarters.

The All-Star Mile betting at Ladbrokes.com.au continues to be led by last year’s Mackinnon Stakes champ Zaaki, Annabel Neasham’s ultra-consistent import easing favourite out from $3 to $3.40.

First-up the evergreen seven-year-old was narrowly beaten in the Group 2 Blamey Stakes (1600m) at the track and distance when a neck off the Danny O’Brien-trained Inspirational Girl.

He is tipped to turn the tables stripping fitter second-up on Saturday despite drawing the carpark out in barrier 15 for jockey Jamie Kah.

Having denied the popular Zaaki a winning return, six-year-old Reliable Man mare Inspirational Girl is the early The All-Star Mile market mover to repeat the feat this weekend.

She is into The All-Star Mile odds of $5.50 drawing favourably in barrier four with Damian Lane continuing associations on the Perth expat and 2020 Railway Stakes winner.

In an open top-half of the market a further two runners are also under $10 to take out the $2.25 million The All-Star Mile winner’s check with Pinstriped ($6.50) and I’m Thunderstruck ($7).

The flashy chestnut’s biggest win was here two back in the Group 3 CS Hayes Stakes (1400m) before his last-start fifth when over four lengths beaten over the mile in the Australian Guineas carrying 57kg.

The Mick Price & Michael Kent Jnr-trained I’m Thunderstruck has the rails-draw in The All-Star Mile field looking to return to winning form third-up.

In the spring the four-year-old son of 2009 Melbourne Cup winner Shocking was excellent winning the Group 1 Toorak Handicap (1600m) with a light weight at Caulfield before his lucrative $7.5 million The Golden Eagle (1500m) triumph at Rosehill.

He has run fifth twice over the 1400m at Caulfield in the Group 1 C.F. Orr and Futurity Stakes this prep and will relish getting out over a mile at the roomier Flemington track where he won by four lengths last July as a three-year-old.

The other most notable The All-Star Mile market move has been on the Peter Moody-trained Lightsaber in from $21 to $16.

Originally looking like he would miss out on a run after sitting just outside the Top 10 vote-getters by only a handful of votes, the classy Zoustar colt now gets his chance from barrier 12 with Luke Nolen aboard.

A winner of four of his dozen starts to date, the four-year-old has had a luckless campaign to date, but looked on track at big odds when just a neck back second to Hitotsu here in the Group 1 Australian Guineas (1600m) a fortnight back.

The All-Star Mile 2022 is the showcase event on Flemington’s nine-race card set to run as Race 6 at 3:40pm (AEDT) on Saturday and full markets can be found here courtesy of Ladbrokes.com.au.