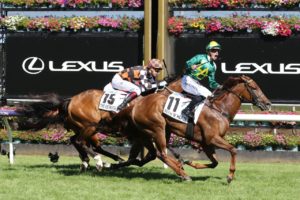 Rock ‘N’ Horse was massive scoring an upset at 100/1 in the 2022 Newmarket Handicap at Flemington on Super Saturday. Photo: Ultimate Racing Photos.

A talented five-year-old daughter of Per Incanto, Roch ‘N’ Horse has been completely ignored by the punters ahead of her Australian debut in the Group 1 $1.5 million Newmarket Handicap (1200m) down the famous Flemington straight despite her good form across the Tasman.

“She’s settled in well, trialled really well and had been pretty luckless not to win a Group 1 before now I reckon.”

Roch ‘N’ Horse was narrowly denied a Group 1 win over the distance in mid-January when runner-up by the barest of margins in the Telegraph Stakes, form that was firmly franked down under in the Newmarket.

The winner of that, Levante, was fourth in the Newmarket Handicap results as the best of the runners on the grandstand side.

“I thought the New Zealand sprinters were up to it,” Moroney added.

“I was pretty sure from what I’d seen there that they were.

“We were always going to get to Australia (with her), it was just a matter of which carnival.”

The Newmarket field quickly split in two after the jump and all the top fancies in the markets went to the outside with the near side pack led by the Chris Waller-trained favourite, last start Black Caviar Lightning winning colt Home Affairs.

The inside lot had Finance Tycoon showing them the way home with the Leon & Troy Corstens-trained The Astrologist right up on the speed along the rails and Waller’s 2020 Coolmore Stud Stakes winning filly September Run third under pressure.

As they reached the clocktower, it was Roch ‘N’ Horse on the far side who quickly caught the eye, Moloney having got a wonderful trail into the race to hit the front and charge home in a blowout result.

Roch ‘ N’ Horse ($101) went on to beat The Astrologist ($61) with September Run ($26), beaten as the $2.80 favourite in the race last year, third in a shock Newmarket Handicap trifecta that paid huge dividends.

Winning hoop Moloney was full of emotion following his breakthrough Group 1 victory aboard the flying Kiwi mare, celebrating early but happy to cop the fine after his deserving success in the time-honoured sprint.

“It’s massive. It’s just more for my family, they all put a lot of effort in behind me,” he said.

“This one’s just as much for dad as it is for me. My biggest supporter and my biggest critic but he’s my best mate.

“The horse today, she was in the zone man. She waltzed of the yard and had a strut to her. She cruised down to the barriers quite as a lamb…she was so clam and conserved all her energy.

“Things couldn’t have worked out better.

“We got a beautiful cart into it…I peeled out at the right time and she just went bang for me, it’s unbelievable.

“It had to be for Mike. We were unlucky not to win one here on Tivaci a while ago

“For the best part of two years I was his main rider…he’s rewarded me today.

“Roch ‘N’ Horse won the Newmarket mate and that’s all I care about!”

Moroney was also quick to credit the hard work and perseverance of Moloney, the 2022 Newmarket result a nice atonement after the pair were luckless in the same race back in 2017 with Tivaci.

“He’s been with us for a long time, on and off,” Moroney said.