Chris Waller could be in for another feature race quinella in the 2022 Surround Stakes on Saturday with his two best fillies out of the Light Fingers Stakes tipped to dominate at Royal Randwick again. 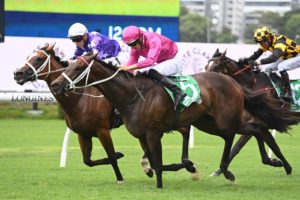 Fangirl (pink silks) for Chris Waller is one of the standout hopes in the 2022 Surround Stakes field at Randwick on Saturday. Photo: Steve Hart.

Heading the Surround Stakes odds at Ladbrokes.com.au is his untapped daughter of Extreme Choice Espiona at $2.15 to atone for her last start loss.

Previously undefeated having won her opening two career starts in the spring by a combined margin of 10 lengths on Soft tracks, she was odds-on first-up in the Group 2 Light Fingers Stakes (1200m) on February 12 on a Good (4).

Despite being beaten, it was in a photo-thriller with her stablemate Fangirl and she lost few admirers going down a nose fresh.

Up to 1400m second-up with improvement to come, Espiona is tipped to turn the tables and post an elite level win at just her fourth career start from a wide alley (13) with James McDonald retaining the ride.

Further working in her favour is the wet track conditions in Sydney, which could be the undoing of a few of her rivals in the Surround.

She has suffered a slight early setback drawn out in gate 16 with Hugh Bowman aboard.

Fangirl won three on the trot in the spring including beating home the boys by three lengths at Flemington in the Group 3 Carbine Club Stakes (1600m).

Her first-up upset saw her extend the winning streak and going up to 1400m will also suit her in the Group 1 rematch this weekend.

Along with the dominant duo Waller also saddles up Hinged in this year’s Surround Stakes field chasing his first victory in the event.

Drawn the inside alley with Brenton Avdulla to ride the Worthy Cause filly, best known for her Group 1 Flight Stakes second over the Randwick mile last October, is at current Surround Stakes odds of $26 to improve on her seventh as a roughie in the Light Fingers.

The remainder of the field can be had at $21 or longer opening up potential value should the favourites flop.

Of the outsiders those that could surprise on the day include: Thousand Guineas winner Yearning ($26) racing first-up from barrier two with William Pike in the saddle, the Gai Waterhouse & Adrian Bott-rained Flight Stakes champion Never Been Kissed ($26) also resuming, the Rob Heathcote-trained Queenslander Startantes ($26), Godolphin’s proven wet-tracker Larkspur Run ($31) and even the Kim Waugh-trained Sweet Ruby ($51) chasing a third win on the trot.

The Surround Stakes 2022 is set to run as Randwick Race 8 at 4:45pm (AEDT) with the latest markets from Ladbrokes.com.au available in full here.