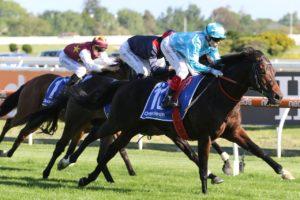 The Melbourne Autumn Racing Carnival gets underway at Caulfield Racecourse with the weekend’s meeting dominated by the Group 1 $750,000 Neds C.F. Orr Stakes (1400m).

The weight-for-age showdown attracted a dozen final acceptors with the latest CF Orr Stakes odds at Ladbrokes.com.au led by Kingman entire Sinawann at $4.

The Irish import is already a winner down under having saluted at this track and distance last November in the Group 3 Kevin Heffernan Stakes (1400m).

He returned at The Valley on January 29 and finished a distant second behind runaway winner Marabi in the Group 2 Australia Stakes (1200m), form he is tipped to improve on fitter second-up and getting back to the 1400m.

Jockey Craig Williams retains the ride on the CF Orr favourite from a favourable barrier six draw looking for his first win in the race since a 2018 victory aboard Hartnell.

The All Too Hard six-year-old boasts a 50% winning strike rate at the Caulfield track from six previous starts including his dual Group 1 Memsie Stakes victories here in 2020 and 2021.

His other Caulfield triumph was also a Group 1 over the 1400m in the 2020 Sir Rupert Clarke Stakes.

Behemoth races second-up on Saturday looking to atone for his first-up second as the beaten odds-on favourite at Morphettville in a Black-Type sprint over 1100m a fortnight back.

The ultra-consistent Shocking four-year-old I’m Thunderstruck is six from nine for his career to date and enjoyed a stellar spring that culminated with wins in the Group 1 Toorak Handicap (1600m) in Melbourne and Sydney’s $7.5 million The Golden Eagle (1500m).

Undefeated first-up having won his two previous runs fresh, the gun galloper looks well positioned to kick off where he left off as Jye McNeil comes aboard for the run.

The Michael Moroney-trained Tofane also resumes in the Orr Stakes, the six-year-old daughter of Ocean Park out to be the first mare to win the event since Suavito (2016).

She chases her first win since Brisbane’s Group 1 Tatt’s Tiara (1400m) last winter and races for the first time since her mid-field seventh behind Colette in Flemington’s Group 1 Empire Rose Stakes (1600m) on Derby Day.

Rounding out the single-figure fancies is the Ciaron Maher & David Eustace-trained Lighthouse ($9).

Ben Allen partners the American-bred mare from barrier two with the consistent grey having won four of her past five starts.

Her latest victory was in the Listed Chester Manifold Stakes (1400m) at Flemington on New Year’s Day and she was last seen running second as the beaten odds-on favourite behind Open Minded in another Black-Type at this track and distance on Australia Day.

The 2022 CF Orr Stakes is set to run as Caulfield Race 8 at 5:05pm (AEDT) and full markets from Ladbrokes.com.au are available here.