The punters are coming for Chris Waller’s champion mare Verry Elleegant to take her number of Group 1 wins into double-figures with a victory in Saturday’s Group 1 $5 million Ladbrokes Cox Plate (2040m) at The Valley. 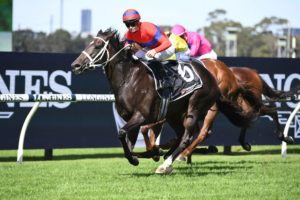 Verry Elleegant is at single-figures to take her number of career Group 1 wins to 10 in the $5 million Ladbrokes Cox Plate on Saturday. Photo: Steve Hart.

A star-studded field of 10 is engaged for the 2021 Cox Plate at Moonee Valley and the early market mover at race sponsor Ladbrokes.com.au is Zed six-year-old Verry Elleegant.

She is in from $7 to $5 occupying the third line of Cox Plate betting to return to winning form after finishing out of the money in Group 1 company for the first time in her career last start.

The reigning Australian Racehorse of the Year ran 3.5 lengths back fourth behind subsequent Caulfield Cup champ Incentivise in the Group 1 Turnbull Stakes (2000m) at Flemington on October 2.

Will she handle The Valley circuit? She has had just the one previous run at the notoriously tight track for a disappointing 12th to the Japanese raider Lys Gracieux in the 2019 Cox Plate results.

Her jockey that run, James McDonald, said there were excuses after she was slow from the gates and the run was better than it looked on paper.

She is after atonement then and the bookies are keeping her safe to do so.

Cox Plate odds remain led by the Annabel Neasham-trained Zaaki who first entered calculations for the country’s best race with a seven-length Group 1 Doomben Cup (2000m) victory in the winter.

He kicked off his spring in the best way possible with back-to-back wins including as the $1.18 favourite in the Group 1 Underwood Stakes (1800m) when defeating Kiwi mare Probabeel by two lengths.

Things came undone however when he raced well below expectations running third as the beaten odds-on favourite when Probabeel turned the tables in the Group 1 Caulfield Stakes (2000m).

Zaaki has McDonald aboard again and is drawn well in barrier six on the drift out to $3 now to become the seventh Cox Plate favourite since the Sunline (2000) for her first to salute for the punters.

Positioned between the champions Zaaki and Verry Elleegant at $4 is the gun three-year-old Anamoe for Godolphin.

The James Cummings-trained Street Boss colt hasn’t run outside the top two since his Group 1 Blue Diamond Stakes (1200m) third back in February.

He enjoyed his second elite level win on October 9 with a half-length win from out wide in the Group 1 Caulfield Guineas (1600m) and must take things to the next level out to 2000m against the older horses at weight-for-age this weekend.

There has been a notable drift for the imported Gold Trip ($9.50 out to $12) having his first Australian start for Ciaron Maher & David Eustace.

The stable won last year’s Cox Plate with the ill-fated Sir Dragonet who sadly broke down last Saturday just a week out from his title defence.

The Australian Bloodstock-raced Gold Trip was won of two Cox Plate horses to fail their vet tests on Thursday morning putting his run under a serious cloud of doubt.

The other runner in serious danger of being scratched is the John Bary-trained New Zealander Callsign Mav.

Zaaki’s stablemate Mo’unga is in from $16 to $14, Neasham’s Savabeel four-year-old first to draw and given barrier four for jockey Hugh Bowman.

He lost few admirers when only 1.5 lengths back fifth in a close Group 1 Epsom Handicap (1600m) finish at Randwick on October 2 from a wide barrier.

Getting back out to his Rosehill Guineas winning distance this weekend from a better gate and Mo’unga could be the value in this year’s Cox Plate.

Also at a nice price are the Irish raider State Of Rest ($11) for dual Melbourne Cup wining horseman Joseph O’Brien and Zaaki’s conqueror in the Caulfield Stakes Probabeel ($14) to be ridden by the leading Group 1 hoop in Victoria this season Brett Prebble.