The field is set for the world’s richest turf race this Saturday, October 16, at Royal Randwick with all 12 slot holders confirming their horses for the $15 million The Everest in 2021 after Trekking (Godolphin) and Embracer (James Kennedy) were named as the final two contenders.

One of the last to announce their runner, Godolphin have opted for experience over youth for their 2021 The Everest contender and are sticking with stable stalwart Trekking who lines-up in the event for the third time.

He ran third to the young Waller-trained winner Yes Yes Yes in 2019 before a fourth last year and continues to be one of the most consistent sprinters in the country.

The now seven-year-old continues to show a zest for racing and has earned a spot after back-to-back thirds in the Group 3 Concorde Stakes and the Group 1 Moir Stakes.

He hasn’t won a race since the 2020 The Goodwood in Adelaide, but third-up and fit at the price could run a nice placing sitting around $26 in current The Everest markets.

The final slot in The Everest field was confirmed on Monday afternoon with James Kennedy naming Embracer to fill the positioned left empty when Queenslander Rothfire was withdrawn from the event and returned home early.

Trainers Gai Waterhouse & Adrian Bott will be represented in their first ever The Everest with six-year-old Sebring gelding Embracer given his eleventh hour shot at the title on the back of his upset third at 20/1 in the Group 2 Premiere Stakes behind Masked Crusader on October 2. 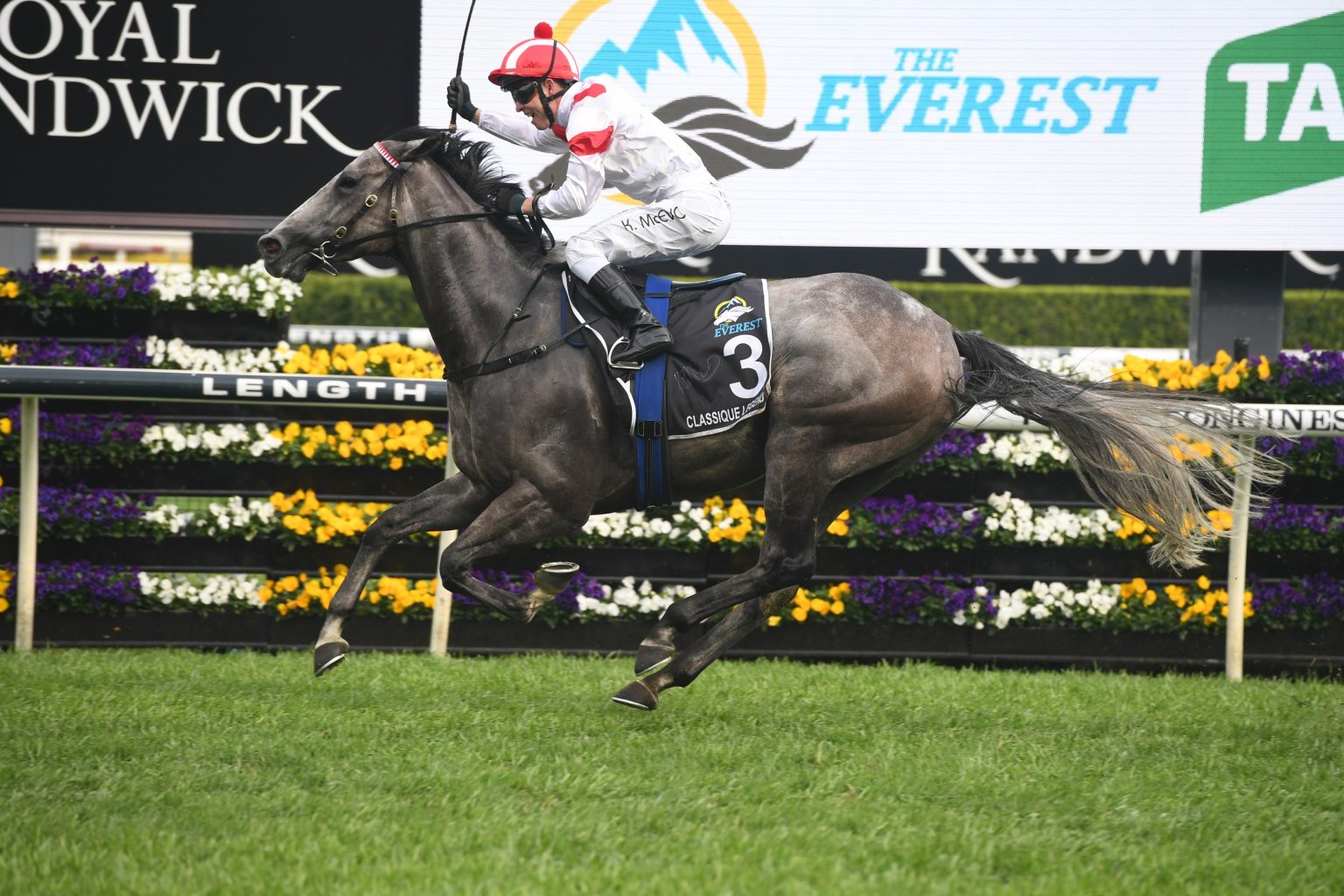 Les Bridge’s reigning champion Classique Legend is well-backed in The Everest betting at Ladbrokes.com.au to go back-to-back in the sprint feature running first-up in the event, now in its fifth year.

The gun grey – representing Bon Ho – is out to emulate the inaugural winner Redzel who won the race in 2017 and 2018.

He contested the 2020 The Everest third-up and fit but goes fresh into his title defence not having run since his failed Hong Kong Sprint bid last December.

Despite not having had a start in 10 months, Classique Legend has had two recent Randwick trials and was excellent in both suggesting he is a genuine threat to continue his outstanding first-up record (4:3-1-0).

Second elect in The Everest odds online is Chris Waller’s stalwart Nature Strip lining-up for the stable for his third shot at the title.

The heroic $8.2 million earner was fourth in 2019 behind his young stablemate Yes Yes Yes before a disappointing seventh last year.

A six-time Group 1 winner including dual TJ Smith Stakes champion at The Everest track and distance, the now seven-year-old is third-up in the race.

He was excellent winning the Group 3 Concorde Stakes (1000m) to kick off his prep and was narrowly beaten by Eduardo in the Group 2 The Shorts (1100m) ahead of their rematch in the big on this weekend.

Waller gets the chance to win The Everest with another three-year-old after that of the aforementioned Yes Yes Yes with Coolmore naming Home Affairs as their runner.

The nicely-bred I Am Invincible colt returned on September 25 defeating Paulele in the Listed Heritage Stakes (1100m), the form of which was franked with the runner-up going on to win the Group 2 Roman Consul Stakes (1200m) last Saturday.

Along with Classique Legend (1st) and Nature Strip (7th) the other The Everest runners returning having contested last year’s race are: Gytrash (3rd), Libertini (8th) and Eduardo (11th).

Gordon Richards’ classy Adelaide raider Gytrash went on to take out the $1 million Winners Stakes on the back of his third in The Everest trifecta and also placed third in Morphettville’s Group 1 The Goodwood (1200m) first-up this May.

After a failed run in Brisbane over the winter, the Lope De Vega six-year-old was eye-catching when third in The Shorts results and will be out to shrug his placegetter status on Saturday running for Inglis once again.

Libertini is one of the more generously priced The Everest contenders, but Anthony Cummings’ mare is so good fresh.

First-up last spring she beat Classique Legend home by two lengths in slick time in the Group 2 Premiere Stakes before her eighth in The Everest.

She atoned next-up in Melbourne when third in the Group 1 VRC Classic (1200m) down the straight at HQ and was also third to Masked Crusader this autumn in the Group 1 William Reid Stakes (1200m) at The Valley.

No stranger to these rivals, the mare races for the first time since an eighth to Nature Strip in the TJ Smith Stakes and Cummings and slot holders Aquis are hoping saving her first-up run for The Everest proves the right move.

Eduardo meanwhile may have been well beaten in last year’s race, but Joe Pride’s now eight-year-old Host gelding has gone from strength to strength since.

He has had six starts since for four wins including the Group 1 The Galaxy at Rosehill and Brisbane’s Group 1 Doomben 10,000 at the highest level.

First-up was the upset victory over Nature Strip in The Shorts and with a solid second-up strike-rate (7:3-1-0) and genuine 1200m form he could be the value again chasing atonement for The Star & Arrowfield.

One of the other shortest-priced chances in the markets is the in-form Masked Crusader, the Hawkes Racing-trained galloper the first to lock in a slot for Max Whitby & Neil Werrett.

Toronado five-year-old Masked Crusader has had four Group 1 runs – all this year – and has been brilliant running third in the Canterbury Stakes, winning the William Reid, placing second to Nature Strip in the TJ Smith and then fifth over further (1400m) in the All Aged Stakes.

He resumed in Melbourne winning the Group 3 The Heath 1100 with a big weight (60kg) before a luckless fifth in The Shorts.

Third-up he was back in winning form, flawless in the Premiere Stakes in the ideal The Everest tune-up.

The John O’Shea-trained Lost And Running (TAB) coming off a Premiere Stakes fourth, Cliff Brown’s Singapore expat The Inferno (James Harron Bloodstock) and his narrow victor in the Group 1 Moir Stakes (1000m) at The Valley Wild Ruler (Yulong Investments) round out The Everest horses this season.

Click here for the latest The Everest 2021 betting odds on the confirmed runners courtesy of Ladbrokes.com.au.