Masked Crusader was excellent late winning the 2021 Premiere Stakes at Royal Randwick with improvement to come for his grand final in the $15 million The Everest next race. 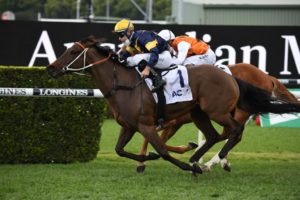 Masked Crusader was tough winning the 2021 Premiere Stakes ahead of the $15 million The Everest. Photo: Steve Hart.

The Hawkes Racing-trained Toronado five-year-old celebrated his second win from three runs this prep improving on a last start fifth to Eduardo in the Group 2 The Shorts (1100m) to claim the lucrative Group 2 $500,000 Premiere Stakes (1200m) thanks to a lovely ride from Tommy Berry.

Berry came back aboard the horse third-up after Jye McNeil rode Masked Crusader fresh to win the Group 3 The Heath 1100 at Caulfield and Joshua Parr was in the saddle for The Shorts.

After missing the kick, Berry rode the sprinter stone cold last at the tail end of the field as Adelong and Rothfire raced up on the speed setting a strong pace on the Good (4) track.

Cutting the corner, Masked Crusader got held up on the straight and Berry had to switch courses before the gap opened up at just the right time and the galloper let down well to finish strongly.

He ran down the impressive Standout who got out to a late lead up the inside and nearly stole the show in an improved effort from the former Group 2 winner before holding for second.

In third rounding out Premiere Stakes trifecta was the Gai Waterhouse & Adrian Bott-trained roughie Embracer who came off back-to-back seconds in good company including in the Group 2 Theo Marks Stakes (1300m) on September 11.

Proving himself a worthy The Everest contender, Masked Crusader will run for Max Whitby and Neil Werrett in the world’s richest turf race back at Randwick on October 16.

While happy with the horse’s effort in the Premiere Stakes, Berry said that his racing style would mean he would need luck to win The Everest.

“He sprinted very well though and he’s got improvement this guy, he had a good blow upon pulling up.

“I think the Hawkes’ are doing what they do, making sure he’s ready on the big day.

“He’s no Chautauqua this guy, but he’s a very good horse.

“He’s definitely going to need luck with the way he races.”

The Premiere Stakes produced last year’s The Everest winner Classique Legend (2nd), while the odds on Masked Crusader to do the double have been slashed into $5 through Ladbrokes.com.au.

Click here for the latest 2021 The Everest betting markets.