Chris Waller’s remarkable training record in the Group 2 $200,000 Phar Lap Stakes (1500m) at Rosehill continued in 2021 with Hungry Heart getting up to become the stable’s sixth female winner of the event in just seven years. 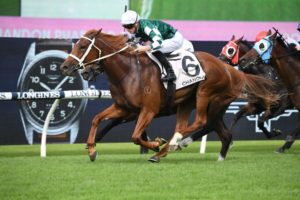 Following on from the success of the world’s best Winx in 2015, Waller has gone on to now prepare the last five consecutive Phar Lap Stakes winners and all have been fillies.

Hungry Heart joined a star-studded list of either proven or subsequent Group 1 winning fillies to take out the event for Waller after Winx along with: Foxplay (2017), Unforgotten (2018), Verry Elleegant (2019) and Funstar (2020).

“It’s been a good race for getting horses’ confidence back. There’s no bigger name than Winx.

“These three-year-old fillies I think lack a bit of confidence in the autumn.

“We’ve found this race is a good stepping stone to get their confidence back and you’ve heard me say it many times, confidence is key with any athlete, especially racehorses.”

The confidence-boosting Group 2 win by the three-year-old daughter of Frankel brought to the end a run of frustrations for punters and connections with Hungry Heart having finished runner-up three times on the trot last time in.

Her spring ended with an unplaced seventh to Odeum in Caulfield’s Group 1 Thousand Guineas (1600m), and her two autumn lead-ups had produced little.

Waller said the team had never lost confidence in her however, Hungry Heart’s seventh in the Group 2 Light Fingers and eighth in the Group 1 Surround Stakes hampered by bad barriers and soft tracks.

“We haven’t lost faith in her obviously…we’ve just stuck to the task,” he said.

“Today we just let her be her and she did it the right way.”

McDonald had the filly settled dead last in the Phar Lap with Poland going out very hard in front to lead the field around.

Hungry Heart got the race to suit, but did look in a little trouble at the top of the straight without much room to move.

With a furlong to go the progressive Mark Newnham-trained Tavistock colt The Irishman got going quickly to hit the front at the 200m, before Hungry Heart finally got out into clear to give chase.

She ran him down in a great last-to-first performance for the half-length victory, with Sacred Falls filly Impecunious also making up ground to finish off the Phar Lap Stakes trifecta in third.

Verry Elleegant (2019) was the last to do the Phar Lap Stakes – Vinery Stud Stakes double.

All-in 2021 Vinery Stud Stakes odds at Ladbrokes.com.au on Hungry Heart to emulate her star stablemate two years’ on have firmed into $7 and are available in full here.