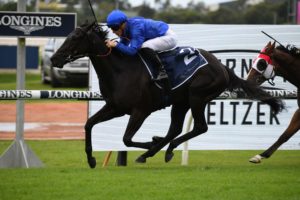 It was Kiamichi who went on to become the latest filly to complete the Magic Night Stakes – Golden Slipper double back at the track seven days later, a feat the back-in-form Arcaded is now firming to emulate.

Franking the Melbourne form in her Sydney debut, the progressive daughter of Street Boss won her two career openers at Caulfield including the 2.5 length Group 2 Blue Diamond Fillies Prelude (1100m) earlier this year.

She was luckless in the Group 1 Blue Diamond Stakes (1200m) when over nine lengths back 11th, but bounced back against an easier field in the Magic Nights with James McDonald in the saddle.

Arcaded bounced out the gates and took the lead easily in the opening stages before jockey Brenton Avdulla rallied aboard the John O’Shea-trained Robodira who headed the favourite to take up the front running on the inside.

Robodira held her lead into the straight, while McDonald sat quietly on the top elect before making the winning move 100m out from the line.

Arcaded got her neck in front before extending her lead to 1.5 lengths by the winning post.

It was a dead-heat for runner-up between Jamaea who made a late run to force the pacemaker Robodira to share the second prize.

All-in Golden Slipper Stakes 2021 odds at Ladbrokes.com.au have firmed in from $26 to $19 on Arcaded and are available in full here.