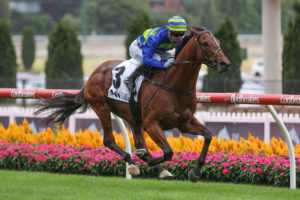 Grandslam is off to Sydney for the Group 1 ATC Derby after a runaway win in the Alister Clark Stakes at The Valley. Photo: Ultimate Racing Photos.

In a winning change of tactics, Kah took control of the race on the Myboycharlie colt taking Grandslam straight to the front and getting things her way in the lead.

Odds-on favourite Cherry Tortoni settled back to third then second last in the run, but never presented as a winning chance eventually crossing a disappointing and well-beaten fourth.

After getting away with all the cheap sectionals up front and avoid the hustling for positions behind him, Grandslam accelerated away as they approached the turn giving them something to chase.

There was no catching him once on the straight however, the winner off and gone for the enormously impressive six length victory over Young Werther (2nd) and Explosive Jack (3rd).

The stylish win handed the stable a treble on All-Star Mile Day and was a dramatically improved effort on his lead-up run in the Australian Guineas when five lengths beaten by Cherry Tortoni (2nd) running 12th over the mile.

The positive ride up in the lead and a sprinkle of rain getting out over further proved the difference with Grandslam now Sydney-bound for a shot at Randwick’s Group 1 $2 million Australian Derby (2400m) on April 3 during ‘The Championships’.

“I’ve got a lot of time for this horse, he’s probably my favourite horse along with Jameka,” co-trainer Maher told Racing Victoria after the win.

“I’ve always had a lot of time for him, he’s had some terrible gates this time round.

“We were keen to get Jamie (Kah) on as he’s had that tendency to overdo it and she rode him beautifully.

“She (Jamie Kah) made her intent to go forward, the horse has got a beautiful action, he’s a really strong stayer…today it looked good on paper and Jamie 10/10 so it all worked out.

“He’s on route to the (ATC) Derby now. She (Jameka) was second in it so hopefully he can go one better.”

All-in 2021 Australian Derby odds at Ladbrokes.com.au on Grandslam have firmed in from $26 to $13 and are available in full here.