Team Hawkes could be tempted to pay a late entry into this weekend’s Group 1 $3 million Doncaster Mile (1600m) with three-year-old Mr Mozart after his 2022 Doncaster Prelude win at Newcastle on Monday. 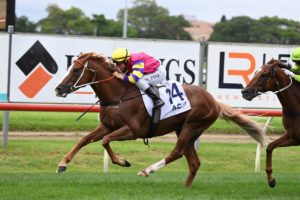 Mr Mozart was too strong late saluting for the punters in the rescheduled 2022 Doncaster Prelude at Newcastle on Monday. Photo: Steve Hart.

The in-form Snitzel colt backed-up from his Group 2 Phar Lap Stakes (1500m) win at Rosehill to make it two-from-two in Sydney this preparation with a gutsy victory in the rescheduled Group 3 $160,000 Doncaster Prelude (1500m).

One of the seven rescheduled races from last Saturday’s washed-out Rosehill meeting, the Doncaster Prelude was moved to Newcastle and it was the punters’ pick Mr Mozart who was too good in the end.

William Pike gave the young favourite a well-judged ride, sending him forward midfield after being caught wide the early stages.

Mr Mozart did plenty of work chasing up on the outside second to the leader The Frontman from the Waller stable.

The pace was strong and the field strung-out in the Prelude as they turned for home, The Frontman still in front looking to go all-the-way.

Pike, having kept his horse balanced, presented as the danger on Mr Mozart on the straight hitting the lead inside the final furlong.

It was the top elect and Our Playboy, who had been given a lovely run nursed along the rails off the pace fifth throughout, knuckling it out the closing stages in an exciting finish.

Mr Mozart was too good in the end giving a nice late kick after working hard off an on-speed performance to fend off Our Playboy who was brave in defeat.

“Probably our intention was to ride him a bit like last start, but I think when he took his time and the other horse led, he travelled well, he just came around the corner and let him balance up and probably got to the better part of the going.

“The part I love the most with this horse is he just fights. When the other horse came at him, he dug deep. He got through the ground well and geez I love this track. I think it was the best move they ever made, Racing NSW, to get this track for today for the races.”

The Gai Waterhouse & Adrian Bott-trained Dajraan was next best making up late ground to finish third.

Mr Mozart is not currently nominated for the Doncaster Mile, run just five days later on Day 1 of Randwick’s The Championships, but Hawkes wasn’t completely ruling out a potential late entry and quick back-up after the horse was an original nominee before they failed to pay the first acceptance fee.

“No he’s not (nominated). We will see how we go. Obviously, it’s a big step taking on the older horses. His last start in the Phar Lap (Stakes) was fantastic, he had a couple of blunders in Melbourne but he loves to get out and race this horse,” he said.

“Whether we step him out (in distance) or whether we drop him back, it depends how the horse pulls up but there are a couple of options going forward. That’s what we do best, we will just place him in the right race and see how he pulls up.”

To date no horse has completed the Prelude – Doncaster double in a single season.