The stud-bound Paulele went one closer to securing a nice spot at stud with an excellent return to win the Group 3 $160,000 Eskimo Prince Stakes (1200m) and remain undefeated at Royal Randwick. 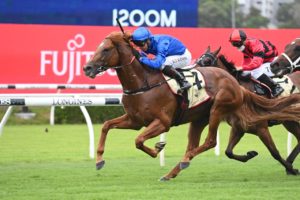 The Godolphin-raced Dawn Approach colt is now five-from-five at the track following his first-up victory in the Eskimo Prince when leading all-the-way with noted front-running hoop Kerrin McEvoy in the saddle.

Good at the same course last October when winning the Group 2 Roman Consul Stakes (1200m), things didn’t pan out for the three-year-old when he went south for the Group 1 Coolmore Stud Stakes (1200m) on Derby Day.

Paulele could only manage to run 12th over six lengths off the winner Home Affairs down the Flemington straight, but returned in good order back at his pet track in the Eskimo Prince Stakes.

After jumping well, the eventual winner went straight to the front racing a little keenly on the inside with Mana Nui second on his outside and Converge settled in third.

The easing favourite on track set a solid pace up front leading a well strung out field.

McEvoy came well off the fence upon turning as the Gai Waterhouse & Adrian Bott-trained Group 1 winner over a mile Converge went back to the inside and the Chris Waller-trained Fastnet Rock colt Ranch Hand moved up to challenge second the outside trying hard.

The dangers were there given every chance, but Paulele gave a kick at the 100m and held the lead to go on and win a half-length from Ranch Hand with Converge in third in a market order trifecta.

It was a nice effort with Paulele beating a quality field with plenty of improvement to come ahead of bigger targets this Sydney Autumn Racing Carnival.

“He did a great job,” trainer James Cummings told Thoroughbred Central after the win.

“He did lead his second start here over six furlongs as a two-year-old.

“That suited Paulele today. He was fresh…he was able to get into his stride and when challenged by a couple of good horses, he was capable of keeping his unbeaten record here intact.

“There’s no doubt the horse is going very well, it’s just a matter for us now to pick our target and get him to win a race good enough to win a roster (as a stallion).”

Potential upcoming autumn assignments for Paulele include Flemington’s Group 1 $1.5 million Newmarket Handicap (1200m) on Super Saturday in Melbourne and the Group 1 $700,000 The Galaxy (1100m) at Rosehill Gardens on March 19 a week later in Sydney.

All-in 2022 Newmarket Handicap odds at Ladbrokes.com.au list Paulele at $13, the colt shorter in pre-field The Galaxy 2022 betting at an equal $6 with Home Affairs and Isotope with full markets available here.