It was a thrilling third edition of the $5 million The All-Star Mile for 2021 with two Hall of Fame hoops battling it out in the closing stages only for Hugh Bowman to hold out Damien Oliver as Mugatoo and Russian Camelot ran the quinella in the world’s richest mile race. 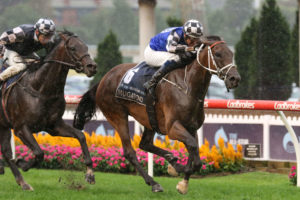 Mugatoo won the third edition of the $5 million The All-Star Mile at the Valley in 2021. Photo: Ultimate Racing Photos.

The rain was coming down at The Valley as the field loaded into the gates for this year’s All-Star Mile race, but the weather did nothing to hamper the 9,000 strong crowd and a mighty cheer went up with the barriers.

It was the hulking South Australian star Behemoth who booted up the inside to take the lead once they found their positions, with Greysful Glamour posted three wide and working hard in second ahead of Shout The Bar.

As they approached the 350m and began to corner, the resuming Danny O’Brien-trained Cox Plate third placegetter at the track last spring Russian Camelot began darting his way through the field.

Oliver really got moving on the gun four-year-old and Bowman followed him through with both star jockeys making the brave moves to turn the finish into a genuine blockbuster.

As Oliver tried to keep Bowman and Mugatoo in a pocket, the gap opened up for the eventual All-Star Mile winner and the duo went stride for stride to the line.

Digging deep, Mugatoo fought off the resuming Russian Camelot to win by a half-length with a gap back for third as Behemoth got up ahead of Lunar Fox.

“It was going to be tight when he got that clear running,” Lees told Racing Victoria post-victory.

“He really rallied and found, it was great to see.

“A great concept and it’s great to be a part of it.”

Mugatoo, proven over further having run second in the Group 1 The Metropolitan (2400m) in Randwick last October, could now head back to Sydney with a number of potential Group 1 targets for the star horse who was only second-up in the All-Star Mile.