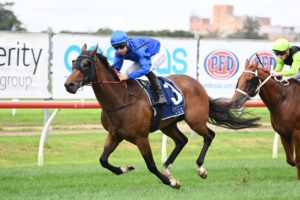 Character looks set for a quick back-up into the Group 1 Australian Derby after a good Tulloch Stakes 2022 win at Newcastle. Photo: Steve Hart.

One of seven rescheduled races from Saturday’s washed-out Rosehill meeting, the Group 2 $200,000 Tulloch Stakes ran over a reduced 1850m with no 2000m starting point available at the Newcastle track.

Given a lovely ride in transit by Tommy Berry who sat just off the speed settled fourth throughout, Character was excellent the closing stages battling it out with the favourite Sword Point before pulling to a clear lead the final 50 metres.

Improving on a lead-up third at big odds behind Mr Mozart in the Group 2 Phar Lap Stakes (1500m), Character is now two from three this prep with improvement to come ahead of his mile and a half test in the ATC Derby at Royal Randwick on Day 1 of The Championships.

“James (Cummings) mentioned that when I was driving up here, he said, ‘look he’s still in the Derby’ so we will just see how he pulls up,” stable representative Darren Beadman told Sky Thoroughbred Central post-win.

“I made mention to Tommy (Berry) that if you’re going to win, leave a little bit in the tank and a little bit on the bone because he might back up in a few days’ time.”

The Gai Waterhouse & Adrian Bott-trained Zoumon was set wide deep out to head the Tulloch Stakes field throughout getting out to a big lead up front without challenge.

Chris Waller’s well-backed American Pharoah colt Sword Point was second, while the Kiwi White Noise got going mid-field sent forward from a three wide position to get up into third at the 1000m.

The field was really strung out approaching the home turn, Tim Clark getting busy on the front-running Zoumon who swung in front before fading on the straight.

Sword Point moved up to hit the lead before Character put down the challenge before going on to win.

“It was a great effort by him,” Character’s jockey Berry said.

“It was actually funny, he raced a little bit fresh today with just some extra couple of days in between runs. I guess you can’t gallop them on Saturday after they get called off and then run him again Monday.

“Without that cover he raced pretty well in my hands and probably told the tale a little bit at the end, but he stayed very well and hopefully he’s hopefully heading to the Derby next week.

“I think I have probably knocked that edge off him which is good, because the way he raced today; if he did that over 2400m it would probably find him out, but it might be a good thing for him.

“He’s had a decent blow and they ran along quite well and I had to use him before the corner to get on the back of James (McDonald), so it wasn’t as easy of a run I would’ve liked to have had for him but in saying that I’ll leave that up to James (Cummings), that’s what he’s best at.”

In an eye-catching second having made up all the ground from the back in a brilliant Derby trial was the Murray Baker & Andrew Forsman-trained New Zealand Derby third place-getter Regal Lion, with Sword Point third as the beaten favourite ahead of Benaud who rounded out the first four.

“It was certainly a nice pipe-opener for him. Lovely ride in transit, he gave a beautiful ride, he had a nice bunny to follow turning for home. The conditions today were probably better conditions leading into a race like the Derby,” Beadman said of the winner.

Character raced in the Group 1 Victoria Derby (2500m) during the spring but only managed to run nearly 11 lengths back eighth behind Hitotsu at Flemington.

It was a forgivable run according to Beadman and one the stable expects him to improve on in the Sydney edition this coming Saturday.

“He had quite an arduous campaign (spring) prior to the Derby,” he said.

“He ran second in the Geelong Classic and then just jarred up a bit after the Derby.

“But he is stoutly bred on the dam’s side. He is related to Fantastic Light, he’s by Teofilo who has sired a (couple of) Melbourne Cup (winners – Twilight Payment and Cross Counter).

“He ticks a lot of boxes. He’s not overly big but he’s got a lot of courage.”

Quick Thinker (2020) was the last horse to complete the Tulloch Stakes – Australian Derby double, but with the Tulloch held the Saturday prior over its traditional 2000m distance.

All-in Australian Derby 2022 betting at Ladbrokes.com.au has Character at $10 equal with Regal Lion, with markets led by Hitotsu at a short $2.50, and are available in full here.