Godolphin’s reigning Doncaster Mile champ Cascadian was too good for his rivals second-up in the Group 2 $300,000 Peter Young Stakes (1800m) running an outstanding trial ahead of the 2022 Australian Cup. 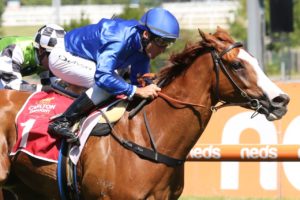 Cascadian has firmed in 2022 Australian Cup betting after saluting for the punters in the Group 2 Peter Young Stakes. Photo: Ultimate Racing Photos.

It was an outstanding ride from the evergreen hoop and a lovely performance from James Cummings’ New Approach seven-year-old Cascadian.

Stripping fitter off his first-up third behind Tofane at the track a fortnight back in the Group 1 C.F. Orr Stakes (1400m), Cascadian relished a rise in distance and a drop in grade in the Peter Young.

Oliver always knew where he wanted to be positioned aboard the weight-for-age big gun, Cascadian settling well tucked away in the box seat third.

After sweating up badly pre-race, Delphi led the field around at a moderate tempo, the slow pace working in the favour of the eventual winner.

Approaching the home turn, Cascadian needed a run still near the inside, but master hoop Oliver never panicked getting off the fence without causing any trouble.

Once the favourite got into the clear and balanced up on the straight, he powered home the final 100m, griding down the front runner and lifting late to defeat the Chris Waller-trained Yonkers.

In an eye-catching return running third to complete the Peter Young Stakes trifecta was Michael Moroney’s Lexus Stakes place-getter from the spring, Emissary.

The winning time of 1:51.59 made this year’s Peter Young clearly the slowest race since Northerly back in 2003, but that took nothing away from the winner who was too good late.

“Ollie got him into a lovely spot,” stable rep Sean Keogh told Racing.com after the win.

“There’s plenty more for this horse during his preparation.

“A beautiful win from the horse.”

It is now all systems go for a shot at the Group 1 $1.5 million Australian Cup (2000m) at Flemington on ‘Super Saturday’, March 12, for Cascadian as Cummings looks for his first win in the classic his late grandfather Bart won a record 13 times.

The latest all-in 2022 Australian Cup betting markets at Ladbrokes.com.au have Cascadian, a confirmed runner in Flemington’s $5 million The All-Star Mile (1600m) the following Saturday, at $6 to be the next and are available in full here.