In what will go down as one of the hard luck stories of the year, Chris Waller’s resuming The Everest hero Nature Strip had zero luck from the start in his first-up run of the autumn and went down in a thrilling photo finish behind his star young stablemate Home Affairs in the 2022 Black Caviar Lightning results. 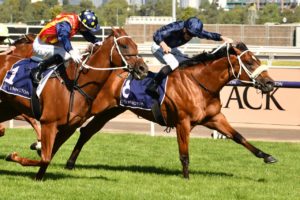 For the second straight year master trainer Waller ran the quinella in the Group 1 $1 million Black Caviar Lightning (1000m) at Flemington, but not in the order predicted by the markets.

Hot favourite was the defending champion Nature Strip in his highly-anticipated return.

The Nicconi seven-year-old however missed the jump and after being tardy away, was then squeezed out of a run as Profiteer went in and Eduardo went out shutting down the star in the field.

Despite the horror start, Nature Strip still managed to produce the run of the race with Jamie Kah handling herself well to finish off just behind the all-the-way winner Home Affairs.

“Just a tragedy from the start with Nature Strip unfortunately,” Waller told Racing.com after the race.

“Not just one knock, but he got sandwiched as well. For him to recover like that and still run so close…great for the horse. He’s a very good horse it’s as simple as that.”

Also first-up for Waller after dominating last November’s Group 1 Coolmore Stud Stakes (1200m) against his own age at the track, Home Affairs set the speed and still kept going despite the looming danger of his $16 million earning stablemate.

“New boy on the block Home Affairs, it was a big gamble bringing him here today,” Waller said.

“He’s come back and beaten the best at weight-for-age, so pretty exciting heading forward.”

After being involved in the Nature Strip shut-out, Profiteer went over towards the flat side trying to avoid further interference and briefly had the lead before Home Affairs and James McDonald moved to the front.

With 400m to go, Home Affairs was the easy leader and really let down at the 200m, but Nature Strip was coming down chasing him home.

The youngster dug in for the fight and despite the late lunge on the line by the favourite, Home Affairs just held on to stand out in a sea of older turf stars in an outstanding return.

“It was a stressful situation that last 100m but both horses went down fighting,” McDoanld told the media after the win.

“He’s an absolute superstar my colt and he knows how to fight.

“The first half didn’t really go to plan to be honest with you, he was just left there, left a sitting duck, and for him to show that much fighting quality and determination and speed is just unbelievable.

“He is just such a star colt. I knew that he would be in for the fight, even though the first half didn’t go to plan, but that is just how good he is.

“So Nature Strip is the world’s best sprinter at this stage and this fella is banging down the door.”

Home Affairs made history as the first three-year-old Lighting Stakes winners since Fastnet Rock (2005) 17 years ago.

“I guess so,” Waller said of the Newmarket next-up for Home Affairs.

“It will depend on weights and things like that.

“They’ll both be going home for an ice tub and beach tomorrow and we’ll reassess on Monday.”

All-in Newmarket Handicap 2022 odds at Ladbrokes.com.au have Home Affairs as the $3 favourite to be the next.

Waller is also weighing up keeping Nature Strip down south for a potential rematch in the Newmarket Handicap, before both horses return to Sydney for ‘The Championships’.

“Whether that’s in the Newmarket, we’ll see.”

The target race there is of course the Group 1 $2.5 million T.J. Smith Stakes (1200m) at Randwick on April 2 where Nature Strip is the dual defending champion having won the race back-to-back in 2000 and 2001.

“He’ll get his chance to beat him (Home Affairs) in the TJ Smith back in Sydney,” Waller said of Nature Strip.

Currently Nature Strip is at $7 in the Newmarket Handicap odds despite likely being out-weighted in the event, while he leads futures 2022 TJ Smith Stakes betting at $3.60 ahead of Eduardo ($6) and Home Affairs ($6).

Looking further ahead, Nature Strip and Home Affairs could also be representing Australian and the Waller stable abroad with the riches of the Royal Ascot carnival in the UK calling mid-year.

“At this stage, I’m talking up racing in Australia,” Waller said.

“We’ll get through the autumn and then see how tough we are about talking about taking on the world.”