Racing fans are in for a mouth-watering edition of the Group 1 Sir Rupert Clarke Stakes next month as the race is all but confirmed as the next-up target for champion Kiwi mare Probabeel following her first-up win in the 2021 Cockram Stakes at Caulfield. 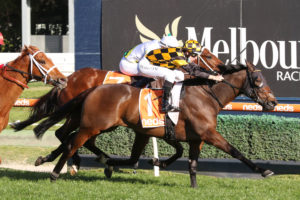 From the outside draw carrying the equal 60kg top-weight with Phillip Stokes’ Robert Sangster Stakes winner Instant Celebrity, Probabeel was given a well-executed ride by jockey Damian Lane.

Lane got his mount into a nice midfield position with cover and rode her with confidence, getting out at the right time.

The Peter Moody-trained Diamonds In The Sky led the Cockram Stakes field around on the fence setting an even speed up front as Probabeel rolled around midfield.

The odds-on favourite was still five off the lead at the top of the straight leaving her run late.

Diamonds In The Sky went for home at the 200m but was quickly joined by the John Price-trained roughie Chassis having her first Group race start since March last year.

The Cockram Stakes result was decided the final 100m however with Probabeel ($1.95) moving up level to Chassis ($41), the mare traveling like the best horse in the race, before just edging out the brave runner-up.

After getting caught in a pocket and losing momentum in her run, Instant Celebrity ($4.40) was also good late getting up for a first-up third to complete the Cockram Stakes trifecta only a half-length beaten.

“It was a brilliant ride by Damian from the outside barrier, he got her into a nice position,” Richards’ stable representative Brad Taylor told Racing Victoria after the race.

“She’s got a real will to win and she got her head out right there on the line and got the job done.

“There’s nice improvement there, so better things to come.”

Taylor confirmed he spoke to Richards that morning and plans were to now head to the $1 million Sir Rupert Clarke Stakes (1400m) back at the track on September 18 where the mare is likely to get in on around 57kg.

“He (Richards) is very hopeful that Behemoth can win (the Memsie Stakes) today and keep her weight down a little bit.

“She’ll get around 57 (kg) in that…she’s probably well-rated in a race like that.”

Reigning champion Behemoth follows at $8 at time of publish.