The money is coming for Jamie Richards’ classy Kiwi-trained mare Probabeel to return to Group 1 winning form as favourite in Saturday’s Queen Of The Turf Stakes 2021 betting markets at Royal Randwick. 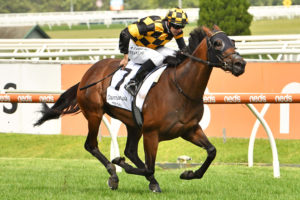 Probabeel is short-priced favourite to win the 2021 Queen Of The Turf Stakes this weekend in Sydney. Photo: Ultimate Racing Photos.

Day 2 of ‘The Championships’ shapes-up as one of the year’s best meetings with four Group 1 events across the incredible 10-race card including the $1 million Queen Of The Turf Stakes (1600m), which has reverted back to its registered name having run the past few years as the Coolmore Legacy Stakes.

The 2021 Queen Of The Turf Stakes field features a quality line-up of 13 fillies and mares and it is Savabeel four-year-old Probabeel who dominates the markets at $2.45 and firming through Ladbrokes.com.au.

She’s drawn well midfield in gate six with star hoop Kerrin McEvoy in the saddle chasing his fourth win in the event since 2012 following previous success aboard: Appearance (2013), Amanpour (2015) and Foxplay (2017).

McEvoy has ridden Probabeel eight times down under for an excellent record that includes five seconds, two wins and the Cox Plate seventh last spring.

The combined to take out the Group 1 Epsom Handicap (1600m) at this track and distance prior to her Cox Plate run last October, and markets suggest Probabeel can get the job done again this weekend.

She won the Group 1 Futurity Stakes (1400m) in Melbourne back in February with Damian Lane in the saddle, before a last start 12th in the $5 million The All-Star Mile (1600m) at The Valley when never in a winning position.

Back in Sydney kept fresh for this easier assignment back against her own kind, Probabeel shapes-up as the deserving and hard-to-beat favourite.

The dangers joining Probabeel at single-figures in the Queen Of The Turf Stakes odds are Odeum ($5.50) in barrier four and the widely-drawn Godolphin star Colette ($7.50) out in gate 12.

Winner of the spring’s Group 1 Thousand Guineas (1600m) in Melbourne, she comes off her first start in Sydney when narrowly beaten crossing a neck back second to Isotope in the Listed Darby Munro Stakes (1200m) at Rosehill on March 27.

Odeum comes down from 58kg that run to 54.5kg here against the older mares and will be excellent getting out over a mile with conditions to suit.

Hallowed Crown four-year-old Colette would have preferred a wet track being three-from-three on Heavy going, but she remains a threat with a good strike-rate at Randwick.

She won the Group 2 Apollo Stakes (1400m) at the track by two lengths fresh on a Soft (7) before her excellent second behind superstar Verry Elleegant in the Group 1 Chipping Norton Stakes (1600m) in late February.

Stepped-up in distance at Rosehill in mid-March, she was far from disgraced when a length back fourth to Toffee Tongue in the Group 3 Sky High Stakes (2000m).

They ran her over the 2000m at Rosehill again in the Ranvet Stakes last time out and she was four lengths back fifth to Verry Elleegant in a very strong form race.

Looking back to her Chipping Norton Stakes run, with Colette back to the mile at Randwick in the Queen Of The Turf she can provide some stress to the favourite.

Also in the mix are the winning trifecta out of the Group 2 Emancipation Stakes with Nimalee, Greysful Glamour and Quantum Mechanic respectively all out to frank that form.

Click here for the latest Queen Of The Turf Stakes 2021 betting odds courtesy of Ladbrokes.com.au.