Trainer Chris Waller is in with a chance at his maiden Group 1 $3.5 million Golden Slipper win with improving type Shaquero returning to form with an upset win in Saturday’s Pago Pago Stakes 2021 results at Rosehill. 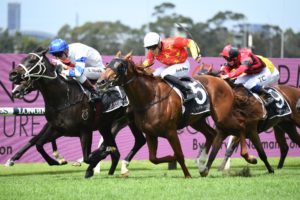 Winner of the $2 million Magic Millions 2YO Classic at the Gold Coast in January, Shalaa colt Shaquero bounced back to his best to salute narrowly in a fighting finish in Sydney’s Group 3 $175,000 Pago Pago Stakes (1200m) earning his spot in next weekend’s Golden Slipper field.

It was an improved effort after he failed to fire in Randwick’s Group 2 Skyline Stakes (1200m) a fortnight ago running a disappointing sixth.

Off that run he went around at nearly $10 in the Pago Pago Stakes markets, but got an ideal on-speed run in transit out of a good gate with Kerrin McEvoy in the saddle.

Anthony Cummings’ roughie Tristate went up the middle of the track to lead, while the favourite Ingratiating travelled midfield in a tricky spot throughout and looked a chance.

Shaquero meanwhile settled a close fourth with on-speed looking the flavour of the day early at Rosehill.

He was squeezed for room at the top of the straight, but eventually the gap opened up for him and he moved up between runners to take the lead 150m out from the line.

Richard & Michael Freedman’s Extreme Choice colt Tiger Of Malay came with a charging late run, but Shaquero just held on for the half-head victory over the fast-finishing challenger in a thriller.

Up-and-coming type from the Snowden stables Mazu ran third looking a horse to watch in the future having had just the one other run for a narrow debut victory at Canterbury last month.

Shaquero is now three from six for his career and into the Golden Slipper with improvement still to come in seven days’ time should Waller head that way.

Second in the Pago results was also enough for Tiger Of Malay to make the line-up in the world’s richest race for two-year-old if connections want to pay the late entry fee.

All-in Golden Slipper Stakes 2021 betting markets at Ladbrokes.com.au on Shaquero to be the first Pago Pago Stakes winner to take out the Group 1 since Stratum (2005) have firmed from $34 into $21 and are available in full here.