Michael Maroney’s promising young colt Poland found himself back in the winner’s stall at Caulfield on Saturday thanks to a classy ride from Jordan Childs in the Group 2 Autumn Stakes (1400m).

After capping off his Spring with a luckless result in the Caulfield Guineas, the three-year-old son of So You Think proved to be a solid value play for punters brave enough to back him at the $13.00 quote first up.

A surprisingly strong tempo was set early on as El Salto and Altai Ranger pushed forward to lead, but that didn’t worry Childs as the winning jock settled two lengths back in third – a decision that paid huge dividends after bursting clear to stave off some very tired horses.

“I was very happy when they went that clip. From the race I saw beforehand I thought it was going to be tricky, but it actually worked out perfectly,” Childs told racing.com.

“We got to the line and he relaxed well. Still hit the front a bit early, I thought he floated a bit, but he had a lot of class to get over the line.”

Poland, a $170,000 purchase at the Magic Millions sales a year ago, found the money on debut at Bendigo before winning two starts later on a midweek program at Flemington last September. 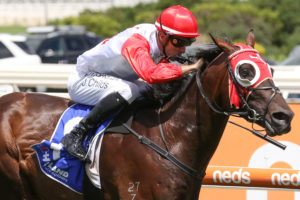 Maroney said after Saturday’s win that he’s always known Poland was a horse of ability and that improvement was sure to come off a forgettable performance last time out.

“Always held him in very high regard, I think he’s a very good horse. Once he paraded on Caulfield Guineas Day I knew he shouldn’t have been here, he was sort of all over the shop, he was probably light and off and it didn’t come together by the end,” Maroney said.

“He’s come back, he’s evened up, he’s a big powerful bloke and he’s got speed for a So You Think as well, so he’s got a real future.”

With both career wins now coming over the 1400m, all signs point towards Poland stepping back up to the mile in the Group 1 Australian Guineas on February 27 at Flemington.

“We came into today trying to work out whether he wants to drop back to the 1200m or go back to the mile. Probably what I’ve seen today the mile should suit now that he’s strong enough” Maroney went on to say.

Poland can potentially follow in Light Fantastic’s footsteps by becoming just the fifth horse to complete the Autumn Stakes/Australian Guineas double, and after the way he shifted through the gears on Saturday, it is no surprise to find him into $13.00 the latest all-in 2021 Australian Guineas betting markets at Ladbrokes.com.au.

Amish Boy was the only eye-catcher running on for second from a long way back.

The Ciaron Maher and David Eustace-trained colt has also seen a trim into $15.00.