Chris Waller’s Irish expat Irish Sequel was excellent late stepping up to two miles to post a narrow photo-finish victory over the beaten favourite, Through Irish Eyes, in the 2022 Brisbane Cup results in Queensland. 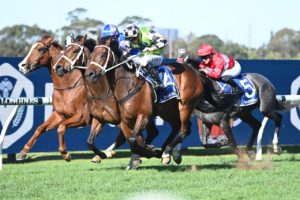 Irish Sequel (pictured winning the Winter Cup at Rosehill) was good stepping up to two miles to take out the 2022 Brisbane Cup at Eagle Farm. Photo: Steve Hart.

Last time out at Rosehill the progressive Invincible Spirit six-year-old won the Listed Winter Cup (2400m) over the mile and a half by a nose.

He was good again up to 3200m for the first time carrying extra weight with James McDonald coming aboard for the ride.

“It was a great win last start at Rosehill over 2400 and the query was stepping up to two miles today, but we switched him off at the back of the field and came with one last run,” Waller’s stable rep  Damien Fitton told Sky Thoroughbred Central post-win.

“It was a greatly-timed run by James today and now we know he can run two miles.

“He got a lot of confidence coming up here (Queensland) after his first prep in Melbourne and he’s continued on with his winning ways. I’m sure the owners are very happy and that was a great win today.

“We’ll just see how he comes through the run and let Chris make a plan from there, but now we know he can run the trip he might be a Sydney Cup horse.”

The Waller/McDonald combo proved too tough to stop, with the hoop charging home up the middle over the final furlong to get past the fighting favourite Through Irish Eyes from the Maher/Eustace stable.

Third last time out in Flemington’s Listed Andrew Ramsden Stakes (2800m), Tavistock four-year-old Through Irish Eyes ($4F) was on pace running one out one back in fourth behind the leader Splendiferous throughout, and looked the winner hitting the lead 250m out from the line.

Despite fighting back after being tackled by the eventual winner, in the end he was no match and had to settle for second as Irish Sequel ($5) got his nose down in time to take out the trophy.

“It was a bit of a slog-fest the last little bit but my horse has been racing in some good company down in Sydney, the horse appreciated being back on top of the ground and he won well,” winning hoop McDonald said after the race.

“We were just minding our own business back in the ruck and chimed in when we needed to. He was strong, I was really proud of his efforts because it was a bit of a fight there.”

The Brisbane Cup result saw Waller post his second victory in the event, but his first at 3200m following the 2013 victory by Moriarty over 2400m.