The Group 1 $1 million Doomben 10,000 (1200m) in a fortnight looks the likely next-up target for the Robert & Luke Price-trained Count De Rupee after the horse’s lovely win in the 2022 Victory Stakes at Eagle Farm. 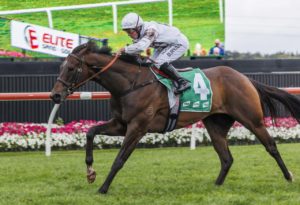 Given a perfectly-timed ride by Brock Ryan, the progressive Real Impact four-year-old was able to wear down the leader on the straight Scallopini and score a tidy victory in this year’s Group 2 $250,000 Victory Stakes (1200m).

Following on from a last-start second in the Group 3 Hall Mark Stakes (1200m) behind Kementari when narrowly denied victory on All Aged Stakes Day, Count De Rupee was back to his best in the Victory.

“It’s good to get a result and it was a great ride by Brock, he never panicked.

The horse celebrated his first victory since backing-up off that devastatingly close second behind I’m Thunderstruck in last year’s $7.5 million The Golden Eagle to win the $1 million The Gong (1600m) over the mile at Kembla Grange last November.

His two early runs this autumn were luckless with an interrupted prep seeing him run 16th in the Group 1 Newmarket Handicap (1200m) and 11th in Sydney’s Group 1 TJ Smith Stakes (1200m).

Back in form now and the stable are eyeing atonement, Count De Rupee now set for another shot at Group 1 glory in the 2022 Doomben 10,000 on May 14.

After taking his time to get to the front, the hot favourite Rothfire eventually set a strong pace up front in the Victory setting it up for the backmarkers to swoop and steal the show late.

Count De Rupee ($7.50) meanwhile was settled just off that hot speed getting a soft run with plenty of cover before weaving through the field once on the straight.

The Steven O’Dea & Matthew Hoystead-trained Scallopini ($20) looked an upset winner inside the final furlong, but Count De Rupee came strongly on the inside to run him down and flash home late by a long neck.

The winner’s stablemate Jamaea ($21), one of only two fillies in the mix, also produced an eye-catching run making up ground to finish a length further back third ahead of a potential Group 1 $1.5 million Stradbroke Handicap (1400m) target on June 11.

No horse has completed the Victory Stakes – Doomben 10,000 double in the same year.

All-in 2022 Doomben 10,000 odds online at Ladbrokes.com.au on Count De Rupee to be the first have firmed into $8 and are available in full here.

“We were going to go to the (Doomben 10,000) but we thought ‘let’s get the horse’s confidence up and come to Queensland and win a race’,” Price said.

“I haven’t ridden many horses as good as this.

“I thought my filly was outstanding back in third there. She’s got a Stradbroke she could be aimed at yet.”

The stable’s Headwater filly Jamaea is at $26 in futures Stradbroke Handicap 2022 betting ahead of next Tuesday’s nominations.