Trainer Danny O’Brien has confirmed plans to head to HQ on ‘Super Saturday‘ and have a go at the 2022 Newmarket Handicap with light weight hope Finance Tycoon after the three-year-olds win in the Group 3 $200,000 Neds Zeditave Stakes (1200m). 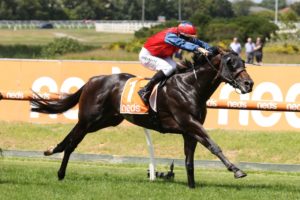 Given a peach of a ride up front by Damian Lane, Finance Tycoon was able to control the race setting a slick pace that the others in the field sat back off thinking the leader would fade.

Getting out to a four-length lead ahead of the chasing Chartres with the hot favourite Generation from the Maher/Eustace stable settled third the outside, Finance Tycoon gave a lovely kick on the home straight.

Generation presented as the threat, but the last start Group 3 Manfred Stakes winning son of Snitzel looked to shift out slightly for his hoop Jamie Kah and couldn’t wear down the eventually winner.

Having really cruised on the Good (4) Caulfield track, Finance Tycoon proved too good in the end, digging in the final 100m to find a bit extra and hit the line strongly three-quarters of a length ahead of the beaten Generation.

O’Brien was quick to credit both horse and hoop post-win and confirmed plans to stick to the six-furlongs and not step the horse up over 1400m despite the ease of today’s victory.

“We played to our strengths today,” he told Racing.com.

“We had the tactic of just trying to break them from the front and he ran those really slick sectionals.

“I thought he was really good.

“His wind’s not great…he’s already had a wind operation so you’ve always got to be cautious of that (when going up in distance).”

The likely next-up run is at Flemington on March 12 where Finance Tycoon will get in on around 50kg in the Group 1 $1.5 million Newmarket Handicap (1200m) down the famous straight-six.

“So, I think we’ll probably get him back down the straight and see what he can do there.

“He’s going to be really aided by the handicapper.

Three-year-olds have won two of the past three editions of the Newmarket with the filly Sunlight carrying 50.5kg to victory in 2019 and Bivouac 54kg for Godolphin in 2020.

The latest 2022 Newmarket Handicap odds online at Ladbrokes.com.au have Finance Tycoon at an all-in quote of $21 to be the next and are available in full here.