Progressive youngster Jacquinot for Mick Price & Michael Kent (Jnr) has shot to the top of 2022 Blue Diamond Stakes betting ahead of this weekend’s classic at Caulfield Racecourse with one-time favourite Lofty Strike under an injury cloud. 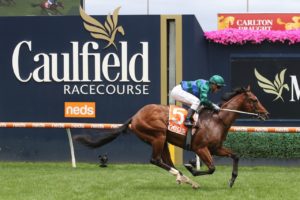 A full field of 16 two-year-olds take to the track in Melbourne’s premier juveniles’ affair, the Group 1 $1.5 million Neds Blue Diamond Stakes (1200m), and the favourite jumps from out in barrier 10.

Jockey Damian Lane rides the Rubick colt for the second time following their eye-catching fifth in the Group 3 Blue Diamond Prelude over 1100m a fortnight back.

Jacquinot was in arguably the worst part of the track that run but still made up late ground to flash home only two lengths off the winner Lofty Strike.

Earlier the up-and-comer won his debut by nearly three lengths at Caulfield in a two-years-old handicap over the six miles on Boxing Day, and he will relish getting back over 1200m in the big one on Saturday.

Jacquinot sits top of the Blue Diamond Stakes odds at a firm $5 quote through Ladbrokes.com.au and is out to be the seventh favourite since 2011 to salute for the punters and the first since Written By in 2018.

Undefeated in two career starts having also saluted at big odds on debut at Flemington in mid-January, the progressive sprinter has eased in betting after drawing out wide in barrier 13.

That gate might actually be ideal however, with plenty to suggest he will appreciate a bit of cover early before powering home.

There has been a query regarding some lameness issues with Lofty Strike this week, the horse ordered to undergo a second veterinary exam by Racing Victoria vets before behind cleared to run in the Group 1.

On Thursday morning he presented with lameness in his right foreleg, and he will be re-examined on Friday with a nervous wait for his large ownership group who are hoping the fairy tale continues.

Co-trainer Peter Snowden is after his fourth Blue Diamond trophy and his second in partnership with his son Paul following Pride Of Dubai in 2015.

Revolutionary Miss has had plenty of support from the punters ahead of her bid to complete the fillies’ Prelude – Blue Diamond double and now at $6.

Jamie Kah has the ride from a solid barrier 11 draw which has produced recent Blue Diamond Stakes winners Extreme Choice (2016) and Catchy (2011).

Rounding out the single-figure fancies this autumn is then Sebonack at $7 for Michael, Wayne & John Hawkes.

Jye McNeil stays on the Capitalist colt after riding him to victory on debut at the start of the month in Caulfield’s Group 3 Chairman’s Stakes (1000m).

Historically the Prelude races have been a better Blue Diamond Stakes indicator than the Chairman’s over the shorter distance.

Three horses have done the double Sebonack looks to complete on the weekend: Redoute’s Choice (1999), Road To Success (2000) and the aforementioned Extreme Choice (2016).

The best of the rest for punters seeking value include the two Blue Diamond Preview winners: Miss Roseiano ($11) who was a late entry by trainer Peter Gelagotis and Anthony & Sam Freedman’s Epaulette colt Daumier ($17) who ran second and third in the respective Prelude races last start.

The Neds Blue Diamond Stakes 2022 is set to run as Caulfield Race 7 at 4:25pm (AEDT) on Saturday and full markets can be viewed here.