The official 2022 Blue Diamond Stakes barrier draw has now been announced with a number of the early favourites drawing out in double-digits for the Melbourne Racing Club’s premier two-year-old feature. 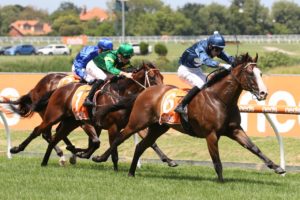 Prelude winner Lofty Strike is one of the headline two-year-olds in the 2022 Blue Diamond Stakes field. Photo: Ultimate Racing Photos.

A capacity field of juveniles is gathered for Saturday’s edition of the Group 1 $1.5 million Neds Blue Diamond Stakes (1200m) at Caulfield with 10 colts and geldings and six fillies.

It is shaping up as an intriguing and wide-open affair with speed mappers and punters now doing their work following the release of the all-important barriers.

Jamie Mott will partner Lofty Strike from barrier 13, which has produced just one winner since 1983.

Still, the colt’s racing style suggests that getting cover early from the gate and allowing him to finish off strongly late could make the wider barrier a non-issue.

Rubick colt Jacquinot won his debut on Boxing Day at Caulfield with a nearly three-length romp home from barrier 13 of 14 over 1200m before dropping back in distance when fifth in the Prelude.

He was only two lengths beaten that day doing his best work late and will relish getting back up to 1200m on Saturday from barrier 10 with Damian Lane retaining the ride.

“He (Jacquinot) was probably in the part of the track in the Prelude that I guess the form now suggests that you didn’t want to be…him drawing out and potentially getting some cover is ideal for him,” Norton said.

Last year’s winning barrier – nine – has produced three winners since 2007 and is drawn this season by the Peter Gelagotis-trained Exceed And Excel filly Miss Roseiano, a late entry into the classic.

She is out to emulate Miracles Of Life (2013) and Pride Of Dubai (2015) as the latest Blue Diamond Stakes winners not originally nominated in the event.

After a winning debut on Australia Day in the Preview, Miss Roseiano ($11) was last seen running second in the Blue Diamond Prelude (F) and that could be the form race to follow into the Group 1.

The last time back-to-back Blue Diamond Stakes winners jumped from the same barrier was in 2016 and 2017 when Extreme Choice and Catchy both won from gate 11.

They prepared Pride Of Dubai for his 2015 success, while co-trainer Peter Snowden also saluted with Earthquake (2014) and Sepoy (2011) as the then head Australian trainer for Godolphin.

Revolutionary Miss occupies the third line of Blue Diamond Stakes betting on the final field at $7.50 following her three-quarter length win at the track on February 12, which looks to be one of the higher-rating lead-up races this year.

Barrier four has produced three champions since 2004, most recently Tagaloa (2020), and six since 1983 making it statistically the most successful gate in recent history.

Also producing three winners since 2003 and five since 1983 is gate five, most recently Lyre (2019), and belongs on Saturday to Daumier for last year’s winning trainers Anthony & Sam Freedman.

Daumier won the Blue Diamond Preview (1000m) on debut before a third in the Prelude, the nicely-bred son of Epaulette looking to be crying out for the six furlongs making him value at $15 Blue Diamond Stakes odds.

Since 2005 six Blue Diamond heroes have won from barrier 11 or wider (including two from gate 15) giving hope to the wider-drawn runners including Team Hawkes’ Prelude runner-up behind Lofty Strike, Semillion drawn the outside alley (16).

The other single-figure fancy following the barrier draw having come up trumps with gate eight is Sebonack ($8) also looking to peak on the day for Michael, Wayne & John Hawkes.

While statistically the Blue Diamond Prelude races have been the ones to follow into the Group 1, Capitalist colt Sebonack comes via different form line having won Caulfield’s Group 3 Chairman’s Stakes (1000m) on February 5.

He should get into a nice rhythm early from his good gate stepping up in grade on the weekend, but howe he handles the rise from that short-distance sprint up to 1200m will be key to his chances.