Pinstriped lived up to the hype remaining undefeated with an impressive late victory in the Group 3 $200,000 CS Hayes Stakes (1400m) ahead of the 2022 Australian Guineas next month. 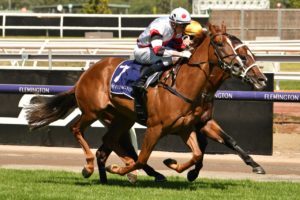 Pinstriped is one of the all-in 2022 Australian Guineas favourites after a good win in the Group 3 CS Hayes Stakes at Flemington. Photo: Ultimate Racing Photos.

The Enver Jusufovic-trained Street Boss gelding was short-priced favourite earlier in the week for the 2022 CS Hayes Stakes before drifting on race day as Lightsaber stole top spot in the markets.

In some pre-race drama, Lightsaber was moved out of the gates after loading and failed to pass a subsequent vet’s check becoming a late scratching from the all-important autumn lead-up.

Pinstriped then having his third career start after back-to-back wins at Moe and Moonee Valley respectively, relished the roomier Flemington track and posted an excellent victory to hand his trainer a maiden Group win as the equal $5.50 favourite.

Michael Dee Michael Dee retained the ride on the up-and-coming miler who continued the fairy tale for his large ownership group ahead of the Group 1 $1 million Australian Guineas (1600m) back at HQ on March 5.

Trent Busuttin & Natalie Young’s previously undefeated Pierro colt Pascero took advantage of the Lightsaber scratching and mustered early speed to lead the CS Hayes Stakes field around from Zethus, while Pinstriped and Dee were settled mid-field a notable gap back.

At the 400m Pinstriped was still five off the lead, while the front-running Pascero gave a good kick inside the 300m looking like the winner.

Pinstriped however wore him down and got over the top of the brave pace-maker, who put in a great on speed effort, the final strides charging through the line for a three-quarter length win.

Peter & Paul Snowden’s Caulfield Guineas runner-up Captivant, who went wide on the turn, got up into third as the equal favourite ahead of the other Busuttin/Young runner Forgot You who ran an excellent first-up run ahead of longer distance targets.

“Fantastic. I watched the race in the cheap seats there by myself and took it all in. Just a magnificent effort on a lot of grounds,” he told Racing.com.

“A credit to everybody. It’s a great reward.

“He wasn’t great in the pre-parade, he put a dent in the rail, reared up. The more we paraded him today the better he went.

“It’s only his second prep and he’s still taking it all in.

“I hope so yeah, pretty exciting (to have him in the Australian Guineas).

“I think what you saw today indicated that the 1600 (metres) will be up his alley.”

The latest 2022 Australian Guineas betting markets at Ladbrokes.com.au have Pinstriped into $5 to be the next and are available in full here.