The Richard & Michael Freedman-trained I Am Invincible filly Queen Of The Ball was far too good for her rivals in the Group 3 $160,000 Widden Stakes (1000m) leading all-the-way first-up for a nearly four-length victory leading up to the Golden Slipper Stakes 2022. 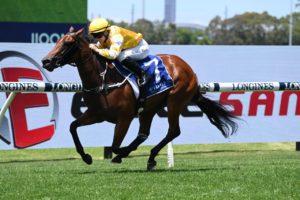 Queen Of The Ball dominated the 2022 Widden Stakes results leading-up to the Golden Slipper on March 19. Photo: Steve Hart.

Runner-up on debut in the Kirkham over the same distance at Randwick last October, Queen Of The Ball showed lovely maturity and improvement fresh this prep to annihilate her fellow fillies in the Widden Stakes results at Rosehill Gardens.

Given a gun ride by Rachel King, the filly was brilliant out to lead before kicking away at the 300m and giving nothing else a chance.

“She was obviously very fast out the gates, but she’s so quick to come back underneath you, so professional.

“When she gave that good kick at the top of the straight I thought ‘it’s going to take a good one to run her down’.

“She’s done everything right so far, if she can just keep doing that (she’ll make it to the Golden Slipper).”

It was an ugly watch for favourite backers on the heavily-supported Peter & Paul Snowden-trained Merson Cooper Stakes winner Ebhaar who was far too keen and eventually ran dead last of those that finished the course.

Sam Clipperton tried to restrain the top elect who was pulling hard and fired-up, but Ebhaar would not settle and continued to race keenly on the outside in fourth before fading on the straight.

Stablemate to the favourite, Drisana, meanwhile failed to finish with jockey Kerrin McEvoy pulling the filly up shortly after the jump with something going amiss.

Another filly from the Snowden stable, Revolutionary Miss was second best steaming home late to finish a distant runner-up after rallying hard the rails.

Pantonario in her third start for the Waterhouse/Bott stable held on off an on-speed run behind the dominant Widden Stakes winner to round out the trifecta.

Queen Of The Ball won in a smart time of 1:03.53, the fillies going about three-lengths quicker than the boys in the Canonbury Stakes with the Widden now looking a stronger form race leading-up to the Group 1 $5 million Golden Slipper Stakes (1200m) on March 19 back at Rosehill.

“She’s done a great job. We were a little bit worried about the outside gate and having to use her up too early,” co-trainer Michael Freedman told Sky Thoroughbred Central after the race

“There’s not much of her, but she’s as tough as old boots.

“She just loves her racing, a great result.

“She did (drop them very quickly). Obviously she’s run right up to that today and hopefully if she can just improving a little bit off of that she might just be in the Slipper.”

Only two fillies have completed the Widden Stakes – Golden Slipper double throughout history: Overreach (2013) and Mossfun (2014).

All-in Golden Slipper 2022 odds online at Ladbrokes.com.au to become the third have firmed notably into $19, while the Canonbury Stakes winner Best Of Bordeaux is rated a $15 chance.

Ebhaar meanwhile has drifted right out from $17 to $41 after her Widden Stakes flop.