The Queensland-trained debutant Best Of Bordeaux absolutely dominated his four rivals including the disappointing odds-on favourite Great Barrier Reef to win the Group 3 $160,000 Canonbury Stakes (1100m) and firm in from triple-figures for next month’s 2021 Golden Slipper Stakes. 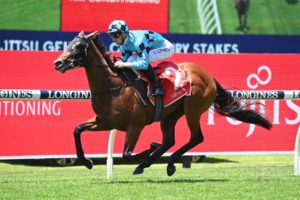 Runaway Canonbury Stakes 2022 winner Best Of Bordeaux was slashed from $101 to $15 to win the Golden Slipper. Photo: Steve Hart.

The Kacy Fogden-trained Snitzel colt came into the Group 3 in Sydney off a lead-up trial win at the Sunshine Coast and was a market mover with Sam Clipperton coming aboard for the ride.

Quick out the gates, Best Of Bordeaux produced a huge performance with sustained speed throughout.

At the 250m he dropped them and put a big gap on the rest of the field, racing away for an effortless win by close to five lengths over the Godolphin-raced Lonhro colt Rakomelo who ran well down the outside for a distant second.

The Annable Neasham-trained Not A Single Doubt colt Flashing Steel was solid in third second-up, while the Chris Waller-trained short-priced favourite Great Barrier Reef had every chance off a lovely trailing run throughout before dropping right out of it for fourth in an extremely flat performance.

Best Of Bordeaux was a little keen early in his first official race start wearing the blinkers when charging up to take the lead from Flashing Steel, but he never looked like getting beaten.

“I was a little bit worried there for a minute I thought he might have been over-racing a little but he stuck to the task and run on nicely,” Fogden told Sky Thoroughbred Central post-win.

“I think Sam probably rode him perfectly too.”

It is now full steam ahead for the up-and-comer who is on track for the Group 1 $5 million Golden Slipper Stakes (1200m) back at Rosehill Gardens on March 19.

Only three horses have completed the Canonbury Stakes – Golden Slipper double throughout history: Fine And Dandy (1958), Sebring (2007) and most recently Vancouver (2015).

All-in 2022 Golden Slipper odds at Ladbrokes.com.au for Best Of Bordeaux to be the fourth have firmed in from $101 to $15.