Chris Waller’s returning star Verry Elleegant is tipped for a successful title defence first-up in the Winx Stakes 2021 this Saturday against a class line-up of rivals at Royal Randwick. 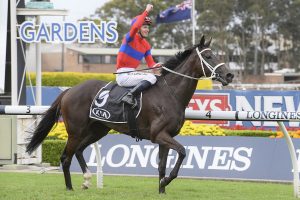 Elite level racing for the Sydney Spring Racing Carnival gets underway this weekend in the form of the Group 1 $500,000 Winx Stakes (1400m) and it looks an outstanding edition of the weight-for-age feature.

She went on to have an outstanding spring headlined by her Group 1 Caulfield Cup success, and was equally as impressive this last campaign during the autumn taking out the Chipping Norton – Ranvet Stakes double.

Last seen running second to Addeybb in the Group 1 Queen Elizabeth Stakes (2000m) in April, Verry Elleegant looked good in a late July trial performance and has drawn a treat in gate five first-up with James McDonald back in the saddle.

Waller chases his seventh Winx Stakes victory and his sixth in seven years as Verry Elleegant looks to go back-to-back in same vein of the stable’s three-time hero Winx (2016-18).

Verry Elleegant sits top of the latest Winx Stakes odds at $2.90 through Ladbrokes.com.au and is joined in the line-up by four of her stablemates including the $5.50 second-elect Kolding.

The now six-year-old son of Ocean Park won the inaugural $7.5 million Golden Eagle winner as a four-year-old and continues to race in strong form having secured his third Group 1 success in the autumn’s All Aged Stakes at this track and distance.

He has the fitness edge in the Winx Stakes racing second-up having run under one and a half-lengths back fifth fresh to Phobetor in the Group 2 Missile Stakes (1200m) on August 7.

Better suited to the 1400m, Kolding looks a genuine second-up shot here with Tim Clark taking over for McDonald in the saddle.

The other Waller-trained hopefuls in this season’s Winx Stakes field are Imaging ($20), Star Of The Seas ($26) and the ultra-consistent Hungry Heart ($17).

Frankel mare Hungry Heart makes her four-year-old debut on Saturday and looks overs at her current price having secured three wins on the trot last time in including her last start Group 1 ATC Oaks (2400m) victory.

Outside of the dominant Waller duo there are a further two other single-figure hopefuls in Winx Stakes betting with the Annabel Neasham-trained Mo’unga ($8) and Think It Over ($8.50) drawn barriers 12 and two respectively.

Tommy Berry rides four-year-old Savabeel entire Mo’unga again after the pair ran last (seventh) but only two and a half lengths beaten in the Queen Elizabeth Stakes during ‘The Championships’.

Think It Over is also first-up on the weekend, Kerry Parker’s So You Think six-year-old ready to fire fresh after two good lead-up trials at Kembla Grange.

He claimed victory in Rosehill’s Group 1 George Ryder Stakes (1500m) at blowout odds in late March before an eye-catching fourth at 20/1 in the Queen Elizabeth making him a danger at a good price again here.

The Winx Stakes is set to run as Randwick Race 8 at 3:45pm (AEST) on Saturday and full markets courtesy of Ladbrokes.com.au can be accessed here.