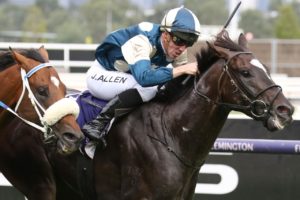 One of four elite level races on Day 1 of The Championships in Sydney, the Group 1 $2 million Bentley Australian Derby (2400m) has drawn a capacity final field of three-year-old stayers.

Hitotsu became the first three-year-old to win the Australian Guineas fresh when kicking off his campaign last time out over the Flemington mile on March 5.

He has been kept fresh again with four weeks between runs going into the Australian Derby where he is sure to appreciate the notable rise in distance from 1600m to 2400m.

It is a similar path the stable had him on in the spring when the progressive youngster improved on a third in the Group 1 Caulfield Guineas (1600m) to win the Group 1 Victoria Derby (2500m) by nearly two lengths next start.

The filly Shamrocker (2011) was the latest to complete the Australian Guineas – Australian Derby interstate double, but she had the benefit of a Rosehill Guineas third in between.

The other before her Gold Guru (1998) had two runs in between winning that year’s Ranvet Stakes before a second to Might And Power in the Tancred (known then as the Mercedes Classic) just seven days prior to his AJC Derby victory.

The first to win both events, Mahogony (1994), also had two runs in between with a third in the Australian Cup and Tulloch Stakes victory at Flemington and Rosehill respectively.

History then is there for Hitotsu to make again and the money is on him to do so.

The danger occupying the second line of Australian Derby betting at $7 is Forgot You drawn out in barrier 13 with Mark Zahra retaining the ride on the Trent Busuttin & Natalie Young-trained Savabeel colt.

Fifth to Hitotsu in the VRC Derby in the spring, Forgot You has had three autumn runs this time in when fourth in the Australian Guineas and third behind the runaway winner Anamoe in the Group 1 Rosehill Guineas (2000m) last time out.

Rounding out the single-figure fancies in the Australian Derby odds this season on the quick back-up is the Kiwi Regal Lion ($8) for Murray Baker & Andrew Forsman.

The latest two of those were in partnership with Forsman and the stable look to have a livewire chance again this season with Regal Lion in gate 10 with James McDonald aboard.

The son of Jakkalberry was third in the Group 1 New Zealand Derby (2400m) a month ago before an eye-catching Australian debut on Monday making up all the ground to flash home for second behind Character in the rescheduled Group 2 Tulloch Stakes (1850m) at Newcastle.

While the Tulloch Stakes has traditionally been an excellent guide to the Australian Derby, the fact this year’s event was postponed before running over an amended distance taking place only five days before the Group 1 makes the form-line a query.

The James Cummings-trained Character ($11) is also on the quick back-up looking to complete the Tulloch Stakes – Australian Derby double from gate 11 with Tommy Berry in the saddle.

Cummings also saddles-up the spring’s Victoria Derby runner-up Alegron ($15), the Teofilo gelding looking to return to form after two disappointing lead-ups including an 11th in the Australian Guineas at 50/1.

The 2022 Australian Derby is set to run as Randwick Race 7 at 3:55pm (AEDT) with the latest markets from Ladbrokes.com.au available in full here.