After a big win at Flemington in the Australian Cup last time out the Edward Cummings-trained mare Duais is back in form and tipped to continue her winning ways heading north for the 2022 Tancred Stakes on Saturday. 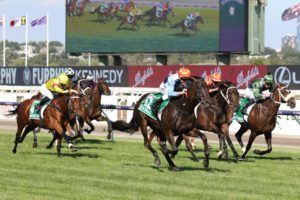 Drawn midfield in barrier seven, four-year-old Shamus Award mare Duais is tipped as the one to beat again installed at current Tancred Stakes odds of $2.90 and firming through Ladbrokes.com.au.

She relished the roomy track at headquarters to win the Group 1 Australian Cup (2000m) by two lengths on Super Saturday and looks fit and ready to fire again going up to a mile and a half.

It was a wonderful return to form in the Australian Cup with Duais atoning for her previous sixth behind Verry Elleegant in the Group 1 Chipping Norton Stakes (1600m) as a 100/1 roughie when only 1.63 lengths beaten on a Heavy (10) having lost a plate and getting caught up at a crucial stage in the run.

From 2005 – 2021 eight favourites in Tancred Stakes betting have saluted for the punters including the past three straight with Avilius (2019), Verry Elleegant (2020) and the late Sir Dragonet (2021).

Duais will face a similar line-up of rivals as last time out as she looks to complete the interstate Australian Cup – Tancred Stakes double for the first time since Preferment (2016).

Think It Over (2nd) and Spanish Mission (3rd) rounded out the Australian Cup trifecta and are both engaged for the rematch on Saturday as the obvious dangers.

Third in the Melbourne Cup behind Verry Elleegant on debut down under last November, he has had three subsequent starts for a Sandown Classic fourth in the spring and back-to-back thirds this prep.

The further the better for the six-year-old who will appreciate getting out to 2400m third-up on Saturday having won up to 3600m previously and he looks very well placed to break his maiden status in Australia.

Kerry Parker’s ultra-consistent Australian Cup runner-up Think It Over is also being kept safe in betting at $4.40 jumping from gate three with Nash Rawiller continuing associations.

The six-year-old son of So You Think has strong form at Rosehill including his $750,000 Rosehill Gold Cup (2000m) win with 61kg here last October.

He kicked off his autumn with a big Group 2 Apollo Stakes win over 1400m fresh before the Chipping Norton fourth and Australian Cup third, so is in the right vein of form to challenge again here.

Outside of the dominant trio the other best in betting looking for an upset include the Joe Pride-trained Group 3 Sky High Stakes winner at the track last time out Stockman ($11), Chipping Norton runner-up She’s Ideel ($11) looking to atone for her Australian Cup 10th and the rails-drawn Angel Of Truth looking value at $19.

The Hawkes Racing-trained Angel Of Truth comes off back-to-back thirds when only a length off Verry Elleegant at a huge price in the Chipping Norton before a third again, this time well beaten but still brave, to Montefilia in the Group 1 Ranvet Stakes (2000m) last weekend at Rosehill.

The 2022 Tancred Stakes is set to run as Newcastle Race 5 at 4:40pm (AEDT) on Monday the 28th of March with full markets courtesy of Ladbrokes.com.au available here.