The Josh Julius-trained galloper from Bendigo Just Folk scored a notable upset in the 2022 Ajax Stakes results defeating the short-priced favourite Ellsberg to win his way into the Group 1 $3 million Doncaster Mile (1600m) on April 2. 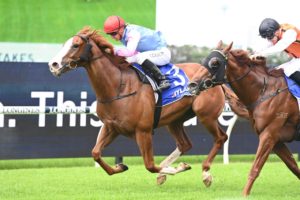 Just Folk is into the 2022 Doncaster Mile field after an upset win in the Ajax Stakes. Photo: Steve Hart.

All the money was on the Gerald Ryan & Sterling Alexiou-trained Spill The Beans four-year-old Ellsberg after his winning return in the Group 3 Liverpool City Cup (1300m) last month.

While brave in defeat, the odds-on fancy battled on well but eventually finished second behind Just Folk who was given a peach of a ride by Jason Collett.

“Wow. We took a big risk, we are obviously a very small stable at Bendigo and taking this horse away from home and being away from Cassie, my wife, and Frankie, my 2-1/2 year old daughter for a week, it’s been the longest I have ever been away from them and it has been tough,” winning trainer Julius told the media post-win.

“We’ve got 18 at work, 17 back home with this fellow here but we’ve got a very loyal band of owners and they will all get as much of a thrill out of this as we will.

“You have to dream. This is the racing industry, it’s full of dreams. We said this horse wouldn’t know himself with 55.5kg on his back and Jason has given him a terrific ride.

“He won’t know himself again in three weeks with 50 (kilograms) on his back (in the Doncaster Mile), that’s for sure.”

Third-up and fit today, Just Folk improved on his mid-field seventh behind Tofane in the Group 1 C.F. Orr Stakes (1400m) at Caulfield last time out when finishing just three and a half-lengths back as a 100/1 pop.

The Ajax Stakes was his first victory since the Group 2 Crystal Mile (1600m) at Moonee Valley last October, the horse racing surprising many in his first Sydney assignment.

Just Folk travelled sweetly in the run getting into a lovely position third the fence as Blue Solider won the early speed battle to lead from Ellsberg.

The pace quickened at the 600m with Ellsberg starting to get closer on the outside and upping the ante ahead of the turn, while Collett took the rails-run on Just Folk to save ground.

Just Folk raced into the lead 250m out with Ellsberg right with him trying hard to lift again but couldn’t get past the winner who had a long-neck to spare on the line.

“It was very tactical. When David Payne’s runner (Blue Soilder) kicked up and held the lead this time it probably made it a touch more genuine,” Collett said post-win.

“He was a touch keen but once they crossed to the fence we followed into position, he came back and relaxed.

“I was initially going to follow Ellsberg but Timmy sat off the lead. I went back to the inner to put a bit of pressure on to get up into that spot and inject a bit more tempo.”

In third to round out the Ajax Stakes trifecta was the Chris Waller-trained Zoustar mare Kiku in another feature race placing from the consistent four-year-old.

It is now onto the Doncaster Mile on Day 1 of Randwick’s The Championships for Just Folk.

There he will be out to complete the Ajax Stakes – Doncaster Mile double for the first time since It’s Somewhat (2017).