The incredible fairy-tale of former Victoria Derby champ Rebel Raider continued for trainer Gary Portelli who celebrated a big win in the wet with one of his daughters, Fireburn, scoring an upset victory in the Group 2 $200,000 Sweet Embrace Stakes (1200m) on way to the 2022 Golden Slipper. 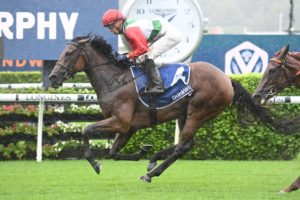 Fireburn was excellent on a Heavy (10) winning the 2022 Sweet Embrace Stakes ahead of the $5million Golden Slipper on March 19. Photo: Steve Hart.

Rebel Raider made history as the longest-priced winner of the Victoria Derby at 100/1 back in 2008.

Looking to follow in her sire’s footsteps and salute in one of the country’s premier races is now Portelli’s two-year-old filly Fireburn who best handled the rain-soaked Randwick track in the Sweet Embrace Stakes 2022.

“He was a great horse to us,” Portelli told Sky Thoroughbred Central post-win.

“Now I’ve got a daughter of his who’s just on her way to the stars.

Going from strength to strength, she made it three straight wins backing-up off her Kensington success over 1150m on a Good (4) from New Year’s Day to show terrific versatility on a bottomless Heavy (10) track in the Group 2.

On January 1 she defeated subsequent Group 2 Blue Diamond Prelude winning filly Revolutionary Miss and she put away another good field on Chipping Norton Stakes Day off an eight-week gap.

“Just like the stallion. She is him (Rebel Raider) in a filly’s body.

“She’s such a beautiful filly.

“She does things that good horses have to do.”

Ridden by Jason Collett Fireburn settled off the pace as the previously undefeated Inglis Millennium winner Xtravagant Star, who dropped right out late, led the field around as the rain came down.

Race favourite, the Annabel Neasham-trained Lady Laguna, settled in a handy third and stayed towards the inside as they turned for home.

With 250m left to travel, Fireburn ($8) began her run in earnest picking up and was enormous late running straight past a wobbling Lady Laguna to post a dominant victory.

Also charging home through the mud late to finish in a brave second was the Anthony Cummings-trained She’s Extreme ($14), while the beaten favourite Lady Laguna ($2.50F) rounded out the Sweet Embrace Stakes trifecta in third.

It looks all systems go for a shot at the Group 1 $5 million Golden Slipper Stakes (1200m) at Rosehill Gardens on March 19 now for Fireburn who ticked the wet track box and showed her class in the testing conditions.

“It’s the only word I could say.

“We had so much fun with Rebel Dane and I reckon this filly is well on her way to some big, big, big, big things.

Portelli won the Golden Slipper back in 2017 with another gun young filly of his, She Will Reign, who won that day on a Heavy (10) in 1 minute 15.04 seconds.

Fireburn’s Sweet Embrace Stakes winning time of 1 minute 15.18 seconds was just shy of that, giving Portelli plenty to be excited about ahead of the world’s richest race for two-year-olds.

“They won in about the same time She Will Regin won the (2017) Slipper…it brought back some great memories and hopefully we can make a few more,” Portelli said.

“The forecast is looking like we’ll probably get a Soft track no matter what.”

The latest all-in 2022 Golden Slipper odds online at Ladbrokes.com.au have Fireburn at $17 to be the next and are available in full here.