The Godolphin-raced favourite Paulele was excellent saluting for the punters in the 2021 Roman Consul Stakes results at Randwick putting his hand up to potentially fill the stable’s slot in Saturday week’s $15 million The Everest. 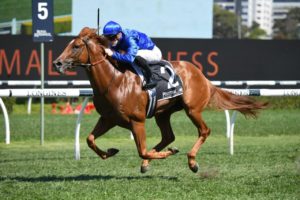 Paulele could represent Godolphin in The Everest 2021 after winning the Roman Consul Stakes in style. Photo: Steve Hart.

The Royal Blue brigade have a number of potential runners for this year’s The Everest field including their ultra-consistent Dawn Approach colt Paulele.

Now a five-time winner from nine starts and four-from-four at the Randwick track, the classy chestnut was too strong for his rivals with a powerful run down the centre of the track in the Group 2 $300,000 Roman Consul Stakes (1200m).

Enjoying his first victory since winning the Listed The Rosebud (1100m) fresh when defeating subsequent Golden Rose Stakes winner In The Congo, the form around Paulele looks excellent should Godolphin opt to run him in the world’s richest turf race.

“We set the horse for the Roman Consul. As we’ve stated in the past we have a lot of confidence in the colt. He’s won it in good style. There was a bit of pressure on him being the short priced favourite. He had the wide run and put himself into the race,” Cummings told the media.

“Had a couple of good horses chasing him down. You have to be impressed by the win. He hit the line really well the last 3 furlongs with a sustained sprint. He’s definitely a high class colt and we have some options with him.”

His lead-up into the Roman Consul Stakes was a second behind Home Affairs in the Listed The Heritage (1100m) at Rosehill on September 25 and he relished a return to Randwick over 1200m fourth-up and fit on Spring Champion Stakes Day.

Home Affairs has already secured a slot in The Everest field representing Coolmore in the event this Sydney Spring Racing Carnival.

Now Paulele could join him, the youngster firming in all-in betting for both the 2021 The Everest as well as a potential trip south on Victoria Derby Day for the Group 1 Coolmore Stud Stakes (1200m) on October 30.

“I think it worthwhile giving it a lot of thought,” Cummings said of The Everest.

“There are other options too. He’ll be competitive in The Everest on the seven day back up I’m sure. The Manikato is an option for him and so is the Coolmore. The winner of this race tends to be a very good lead up to the Coolmore every year. They always run well. He’s knocking on the door to be a potential G1 horse but that is for us to consider. There is not long to go before we have to lock in our own horse and you’ll know once we’ve had long discussions.”

Paulele is into $7 in pre-field 2021 Coolmore Stud Stakes odds at Ladbrokes.com.au – available in full here.

He is right into $8 for The Everest.

Ridden by his regular hoop James McDonald in the Roman Consul Stakes, Paulele was away okay from the barriers settling wider out fifth in the run as A Very Fine Red led the field around.

Once on the straight, McDonald began his move on the well-backed favourite and Paulele did not disappoint, charging home to grab the lead and defeat the David Payne-trained Gleneagles with King Of Sparta for Team Snowden in third.

Click here for the latest The Everest 2021 betting markets courtesy of Ladbrokes.com.au.