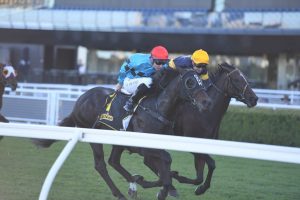 One of the key support acts on the Doomben Cup Day card, this year’s Group 3 $175,000 BRC Sprint (1350m) saw a return to form from six-year-old Emerald Kingdom second-up who won the event as a $34 outsider in betting at Ladbrokes.com.au.

It was a gutsy on-speed performance by the son of Bryannbo’s Gift who jockey Robbie Fradd got up into second early before hitting the front and doing plenty of work the second half in the lead out wide.

Emerald Kingdom looked a sitting duck from the position heading around the turn and into the home straight, but nothing could catch the galloper who relished a return to Doomben on the back of his eighth to Niccanova in the Group 2 Victory Stakes (1200m) at Eagle Farm on May 1.

Back to 55.5kg having carried 58.5kg at weight-for-age last start, the horse crossed early from a wide alley and still had enough left in the tank to put away a good field of rivals including the Group 1 winning runner-up Tofane.

Michael Moroney’s Ocean Park mare was a big improver in the BRC Sprint, brave carrying 60kg with Kiwi hoop Opie Bosson aboard, and narrowly nudged out another eye-catcher with Axe finishing third to round out the trifecta.

As for the BRC Sprint winner Emerald Kingdom, he looks set to head back to Eagle Farm on June 12 for a shot at the Stradbroke Handicap.

Fradd rode last year’s Stradbroke Handicap winner Tyzone (2020) – winner of the previous season’s BRC Sprint in 2019 – to victory in the race and could get a shot at back-to-back victories continuing his strong association with Emerald Kingdom.

The BRC Sprint was the sixth ride for Fradd aboard the horse for his fifth win.